Innjoo android smartphones were not popular in Nigeria until the beginning of 2014 and was marketed exclusively by Jumia Online Store. Although the Innjoo smartphone is still not as popular as the likes of Tecno, Gionee and Infinix, yet it as managed to draw some fans to itself and have also eaten into the market share of the likes of Tecno, Gionee and Infinix one way or the other. The long and short is that having a new player in the smartphone market encourages competition and benefits the consumer. 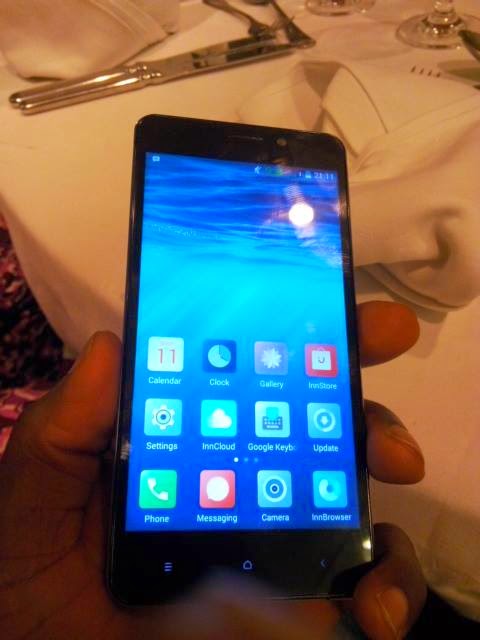 Today, a new version of the Innjoo smartphone was unveiled at the Sheraton Hotel in Ikeja with quite a number of attendees. The newly launched smartphone is known as the Innjoo ONE smartphone with good and impressive specifications that will sway some folks away from the products made by Tecno, Gionee and Infinix. 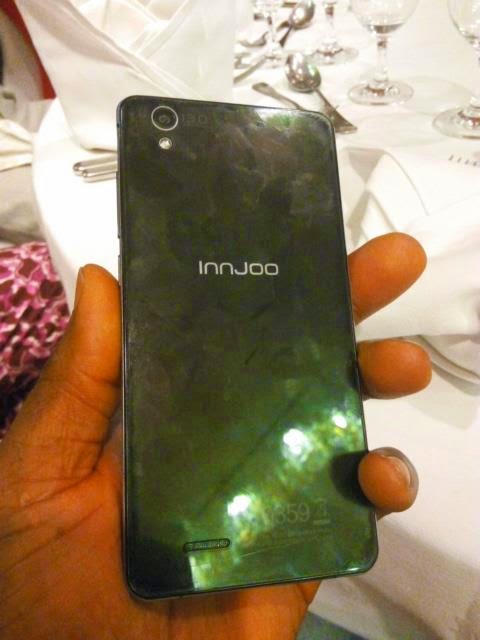 The Innjoo ONE has a dual SIM card with dual standby; something Chinese and majority of MediaTek phones are known for. However one thing that caught our attention is the fact that Innjoo didn't give the usual 3.75G/3.5G and 2G but went a step further to make sure that the Innjoo ONE supports LTE network. LTE networks are the new networks that have data transfer speeds greater than the usual 4G networks - the bad news is that there is no carrier with LTE network in Nigeria.
Unlike what we have been used to with respect to the plastic casing for the Tecno, Gionee and Infinix phones, the Innjoo ONE boast an aluminium design, well flushed, with a thickness of just 6.9mm and weighs just 123g. Furthermore, the newly announced smartphone has a 5.0 inch stunning IPS display with a multitouch touchscreen. Resolution for the Innjoo ONE stands at 720 x 1280 which brings it to a total of 293.72 PPI. 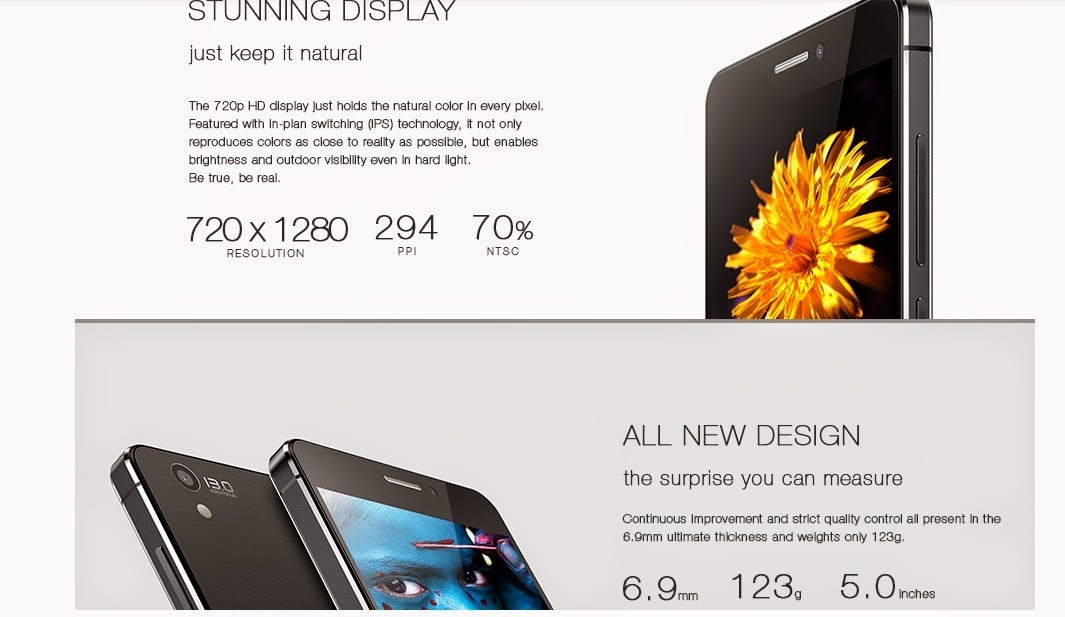 It is important to also note that the device comes with a 64bit architecture MT6752 octa (8) core processor. Which is very commendable seeing that most OEMs are going 64bit these days and Android lollipop is also made to fully support 64bit processors. The clock speed for the Innjoo ONE is 1.4GHz. 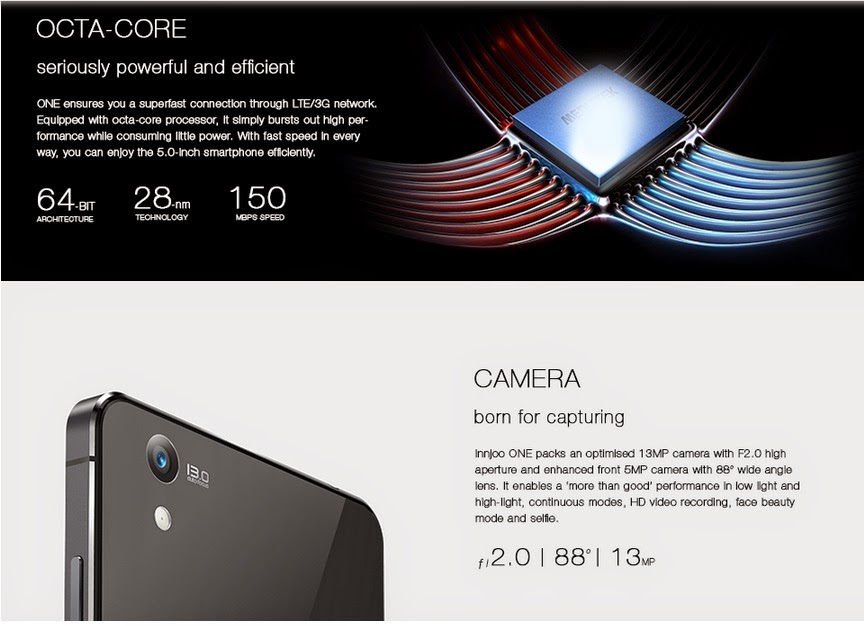 Furthermore, the camera the Innjoo ONE is equipped with is a good one. It has a 13 mega pixel back camera with a face detection, geo-tagging and a LED flashlight for taking pictures in the dark or low light environment. The front camera is 5.0 mega pixel which is good for those selfie pictures and video calls.
The innjoo ONE comes with a customized UI known as the InnOS although what actually runs under the hood is Android 4.4.2 OS.
It should excite quite a lot of people to know that the Innjoo ONE comes with 16GB internal memory which can also be expanded with the help of a memory card slot. The slot can support a memory card of up to 32GB. The internal memory didn't disappoint and so is the RAM the phone is equipped with. The Innjoo is equipped with a 2GB RAM and that should  be enough to run all the apps you may want to run efficiently.
As far as the battery department is concerned, we can say that the 2600mAh polymer battery the phone is equipped with should be enough to get majority of folks through the day on a single charge.
The Innjoo ONE will come with a WiFi 802.11 b/g/n wireless specification and a Bluetooth v4.0 alongside a 3.5mm earphone jack. In the miscellaneous department we know that the smartphone comes with FM Radio, different sensors like gyro, proximity, and light sensors.
For pre-ordering of this new product, you will need to part with a total of N27,999. Pre-order is supposed to start on the 12th of February 2015 but some can go ahead as at this writing to pre-order. 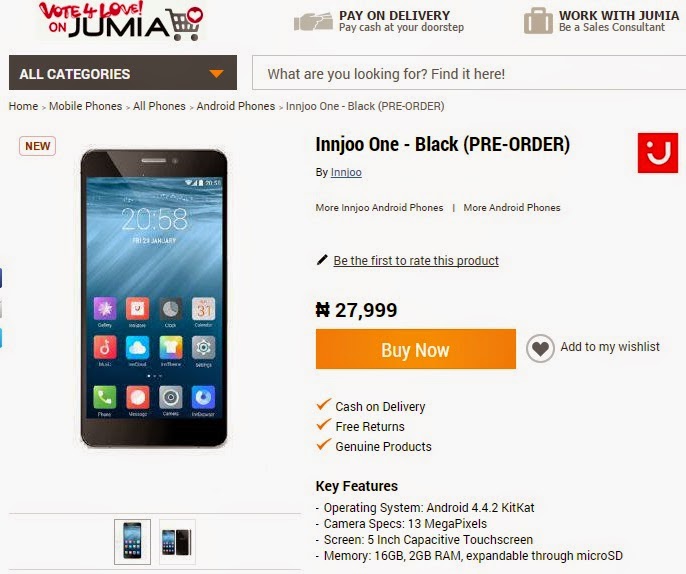 Will the Innjoo ONE give Tecno and Infinix  flagship devices a run for their money? Drop your comments below.
Like our Facebook page and follow us on Twitter for more smartphone news and guides.
image source: jumia