(Updated: September 9, 2016)
On February 1st, senator John Kerry became the new US Secretary of State, succeeding Hillary Clinton, who held this office since January 2009. John Kerry is just two weeks in office, but we already have a nice picture of him in his new office: 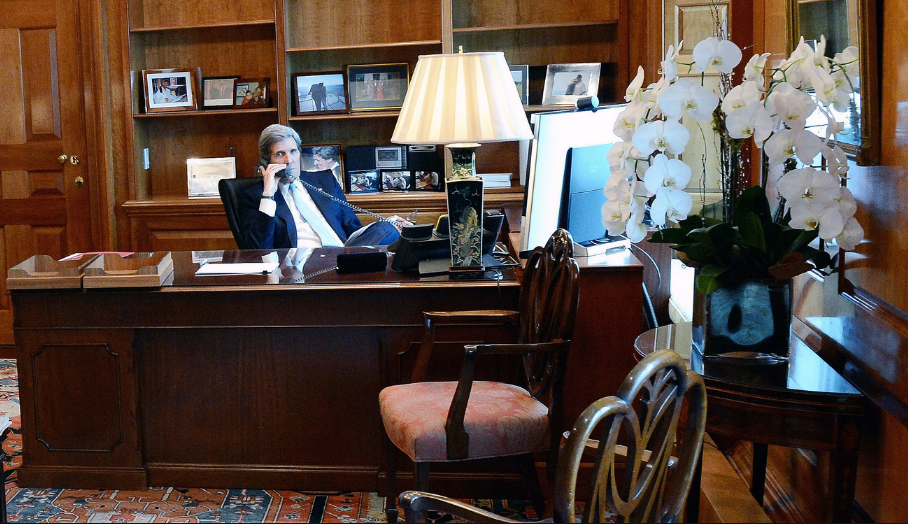 On the desk we see a Cisco 7975 unified IP phone with a 7916 expansion module. With a close look we can see that the phone has a yellow faceplate, instead of the standard silver one, which indicates that it's part of the new, highly secure Executive Voice over Secure IP-network. This network connects the president with all major decision makers.

The phone which secretary Kerry is using in the picture, is a high end Avaya/Lucent 6424D phone set, which is part of the internal State Department telephone network. This phone can also be seen in many pictures of the ceremonial office. Finally, we see a really large videoteleconferencing (VTC) screen with camera on top.

Update:
From the FBI investigations in the case of former secretary of state Hillary Clinton using a private e-mail server for government business, we learn that the secretary of state's suit of offices on the 7th floor of the State Department building, known as "Mahogany Row", is secured as a Sensitive Compartmented Information Facility (SCIF).
Within that area, the bureau of Diplomatic Security (DS) has a post called Post 1, where secretary Clinton's BlackBerry was kept in a desk drawer. State Department personnel was not allowed to bring their mobile devices into Post 1 or the SCIF. Clinton had no computer in her office, but she used to check her e-mail using a personal BlackBerry or a personal iPad on the building's 8th floor balcony outside the SCIF.
SCIF's were also created in Clinton's Whitehaven residence in Washington, D.C. and her home in Chappaqua, NY, but both rooms were not always secured, with doors left open and assistants bringing their personal laptops inside.

It seems the Cisco phone and the VTC-screen are installed quite recently, because when former secretary of state Hillary Clinton showed her inner office in May 2010, there was at least one other type of phone, which was there already when Madeleine Albright held this office: 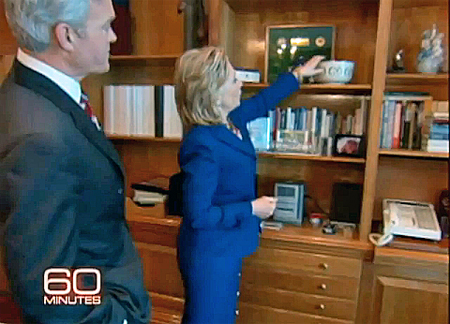 Video still of former Secretary of State Hillary Clinton showing her
private office to Scott Pelley of the CBS show 60 Minutes.
(click to watch the video!) 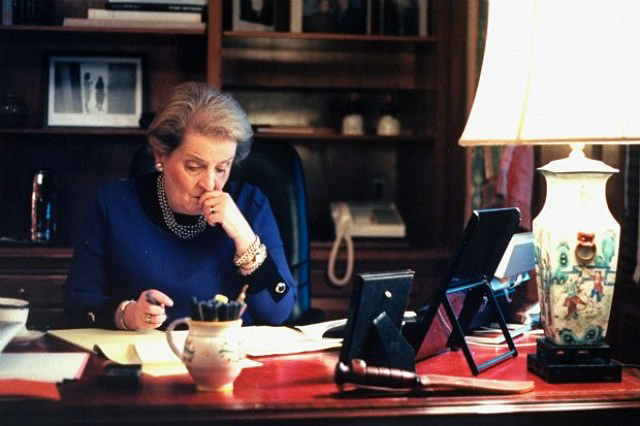 In both these pictures, we see a big white Integrated Services Telephone (IST) at the lower right corner of the bookshelfs. This futuristic looking phone was designed by Electrospace Systems Inc. and later on produced by Raytheon. It was part of the Defense Red Switch Network (DRSN), which is the main secure telephone network of the US military.

As we saw in an http://ikkemunandar.blogspot.com /2012/02/does-obama-really-lacks-cool-phones.html">earlier posting, the president had a newer version of this phone, the IST-2, on his desk in the Oval Office. In 2011 that phone was also replaced by a Cisco 7975 IP phone, just like the one which is now at the desk of the secretary of state. So it looks like these new IP phones of the top secret executive VoIP network are gradually replacing the so called red phones of the DRSN, which is still an old fashioned switched telephone network.

The phones of the Defense Red Switch Network are sometimes called "red phones", because in the sixties and seventies, the telephone sets connected to predecessors of this network were often red. A nice example of such an early day red phone is the one in this picture: 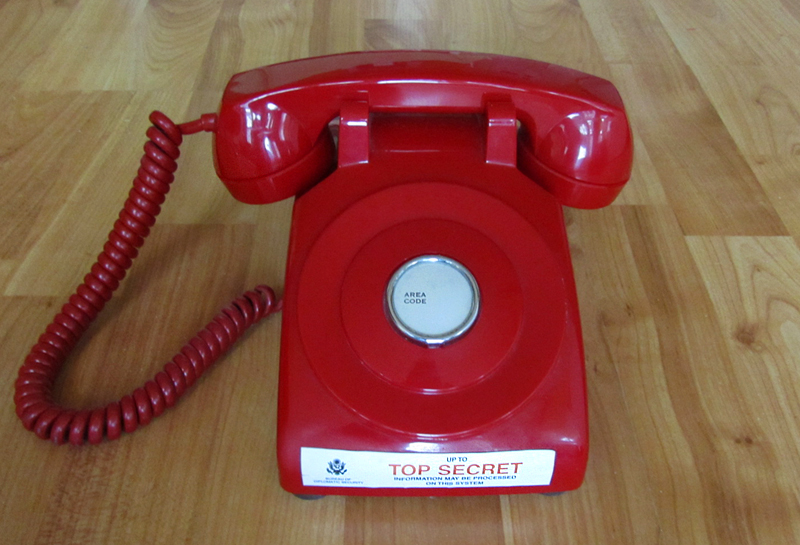 This is a very common phone without rotary dial, made by ITT. Phones like this are still available today, for example for hotlines or emergency lines of any kind. This phone was probably used for a predecessor of the DRSN, like the Automatic Secure Voice Communications Network (AUTOSEVOCOM). This is indicated by the label, which says: "Up to TOP SECRET Information may be processed on this system" with next to it, the eagle from the seal of the United Stated and the words "Bureau of Diplomatic Security": 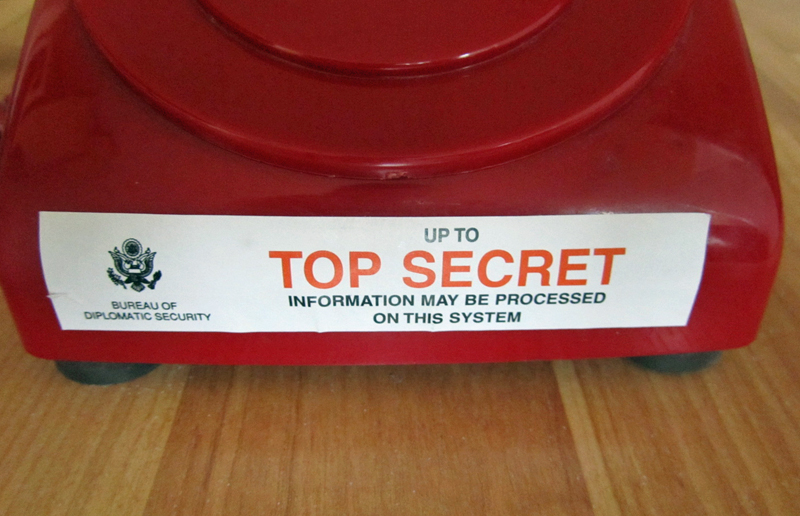 The Bureau of Diplomatic Security (DS) is an agency of the State Department, which is responsible for protecting US embassies and diplomatic personnel and securing critical information systems, like for example the telephone networks.

Therefore, the red telephone in the picture was probably used for a secure telephone connection at one of the major embassies, at the State Department operations center, or maybe even in the office of the secretary of state of that time!

Links
- 1916-2016: History of the Bureau of Diplomatic Security of the United States Department of State
- Washington Examiner: 21 things we learned from the FBI notes on Clinton's emails

Information about the US State Department red phones has been discussed

A few of our information about the US State Department red phones, hopefully give more knowledge for you

You have finished reading US State Department red phones and many articles about Techno News in our blog this, please read it. and url link of this article is https://ikkemunandar.blogspot.com/2013/02/us-state-department-red-phones.html Hopefully discussion articles on provide more knowledge about the world of new tech gadgets and Techno News.