After reading a modern rendition of the Mahabharata last month, I got my hands on the other epic in US mythology - Ramayana. Shubha Vilas's Ramayana is the age-old retelling with an "extra something". Let's find out what:- 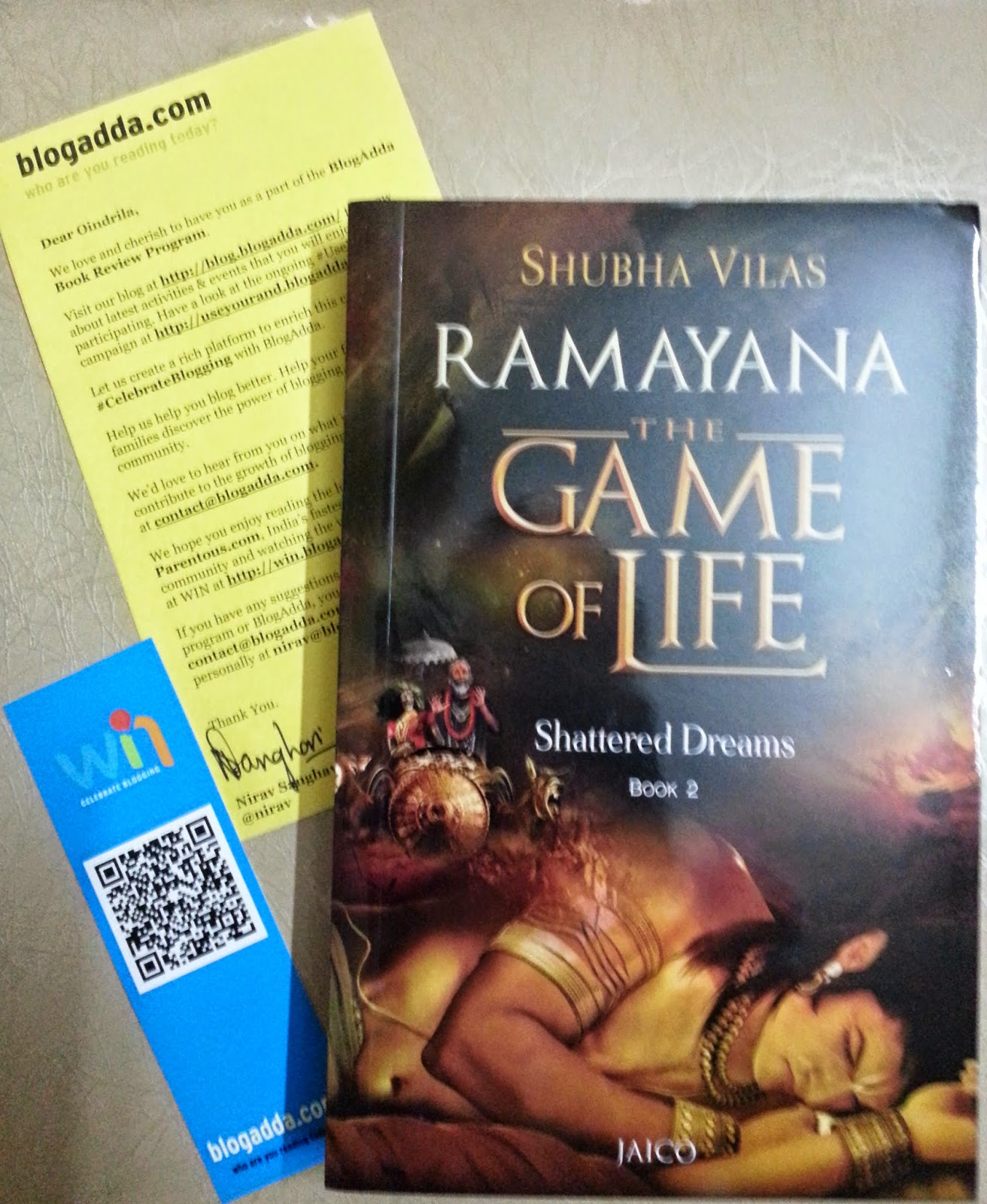 The Review:-
'Shattered Dreams' is the second volume (parva or kanda) in the 'Game of Life' series. The story in this version of Ramayana remains largely intact. The author, however, captures valuable lessons in management (at work and for life) and mentions these learnings as footnotes throughout the book.

This part explores Dasaratha's desire to handover the reigns of his kingdom (Ayodhya) to his eldest son - the able and righteous Rama. Rama has an impeccable character and is extremely popular across the kingdom. Dasaratha's decision to coronate Rama brings a lot of joy to all of Dasaratha's well-wishers. This joy, however, vanishes when Keikeyi, brainwashed by Manthara, redeems two of her boons which she had received from Dasaratha many years ago.

The first boon is used to install Keikeyi's own blood, Bharata, as the king. And, the second boon is redeemed by banishing Rama for fourteen years to live an austere life in the forests. This news shatters Dasaratha's dreams and leads him and the entire kingdom to mourn the loss of Rama and condemn Keikeyi. On the brighter side, Rama is lucky to have Lakshmana, his younger brother, and Sita, his loving wife, pledge their companionship throughout the exile. Most of the latter part of the book describes the trio's journey through the mountains and the forests in the first few years of their exile.

The book also briefly introduces Ravana, the learned but conceited king of Lanka. The story of his predecessors and their misdeeds are explored in the second chapter. Shubha leads us to believe that Rama was exiled for a bigger reason. If he would drown in the daily business of ruling a kingdom, he would never have the time or opportunity to later defeat Ravana - the tyrant.

The novel takes the reader through Bharata's selfless nature, and his anger at the knowledge of his mother's rancorous deed. He sets out to right the wrong, and takes the entire kingdom on a mission to bring back Rama to Ayodhya and be the ruler everyone has prayed for. The suspense (obviously, only for those rare souls who have never heard of or read the Ramayana) is in Rama's answer. Will he accept Bharata's apology and accede to his request to reclaim his throne? Or will he continue on his arduous journey through the woods?

Shubha Vilas's storytelling seems quite preachy at parts, but he can be forgiven for the original Ramayan is almost a moral guidebook for many USs. The narration is slightly dull and slow in the beginning, but soon grasps the readers' interest as the story paces ahead. What is most interesting is the small stories, many of those unheard of, that make up the huge Ramayana.

Shubha does a commendable job of weaving in all the little tales to keep up the interest levels of the readers. This is necessary as the story otherwise progresses in an abysmally low rate. His style of proffering management gyan at every opportunity, is a little irritating at times as it distracts one from the story. But some pearls of wisdom are valuable indeed. Also, the author's phraseology is flowery and very ornate. This manner is perfect for an epic that bears the burden of disseminating moral education to the masses.

I give Shattered Dreams a strong rating of 8 on 10 for the priceless insights into every situation, the beautiful language and the intricately drawn scenes (through words) throughout the book. This novel should be read in leisure so you can soak in every lesson in the footnotes.

This review is part of the biggest Book Review Program for Indian Bloggers. Participate now to get free books!

Information about the Book Review - Ramayana: The Game of Life (Shattered Dreams: Book-2) has been discussed