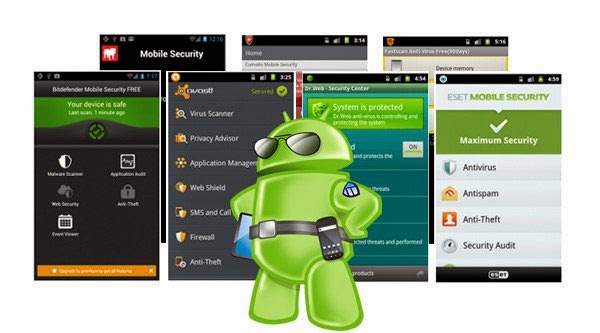 After a lot of presentations and first impressions, we are gradually returning to normal, although there are still many hours of MWC 2014 in Barcelona.

While manufacturers are showing their terminals to reach most of the public as possible, with equipment for different ranges, the comparisons between them or are taking shape, and is that even as they say, comparisons are odious, of course there is nothing better to offer really know what each and every one of the terminals, leaving patent strengths and weaknesses becoming evident.
This time we want dueling to which we can classify as the best smartphones of the moment midrange.

Although this list surely we could add many more, we decided to focus on the most recent models, finishes present, who actually joined two devices that could not be left out, and this comparison we will do with the variants LTE each.
So, Huawei, Samsung, LG, HTC and Sony face-to-face through a hole in the middle range, so are you going to lose?

To know them a little better, we will discuss each model separately, and know its main specifications.

We can say without fear of error, that Huawei is one of the largest companies in the mobile industry, as Huawei demonstrates his incredible growth for a few months, which has much to do with the expertise of the firm in its products.
Now It debuted the new Huawei Ascend G6, a perfect mid-range to contend for at least the first part of the year, against opponents who will not be few, and each one harder. The Chinese company and rubs shoulders with the largest historically, offering the following features: 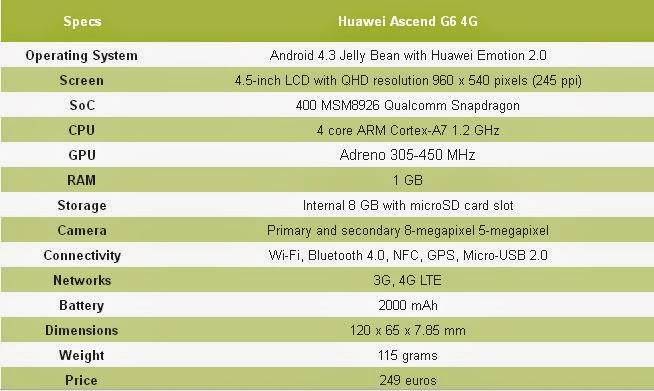 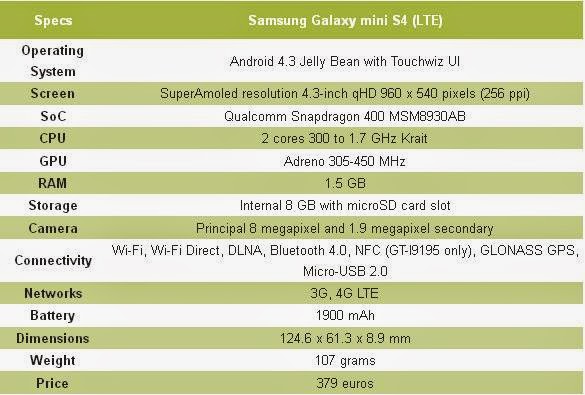 Another which we decided to show you guys what it will be their average range for the next few months. Japanese giant Sony. With the introduction of Sony Xperia M2 , showed a terminal is consistent with what the company is doing for many months, that is, to continue their particular and restrained design.
In addition, the Sony Xperia M2 also features water resistance and dust, which almost nobody
can say within this range. Specification of Sony Xperia M2 (LTE): 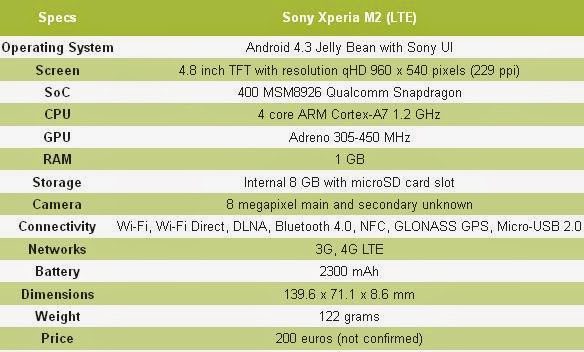 Having created one of the best smartphones of its history , the One HTC , the Taiwanese company decided to expand this family with two diametrically opposed models, one that would grow in size, and another shrug . The latter is at hand, the HTC One mini , your bet 2013 on the midrange, but at least until his successor is present, it will surely come months after the launch of the new top-of-war will continue.

Here are its specifications: 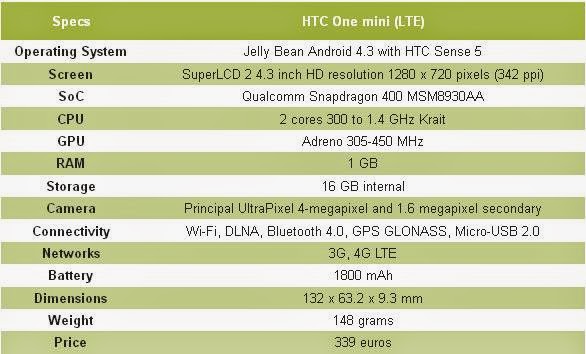 The last opponent call to battle is the LG G2 Mini , he advanced his presentation a few days before the MWC, and we have been able to prove at the fair . Most mortals we kept hoping that this time the South Korean firm follow in the footsteps of Sony , which as you know, throwing a "mini", the terminal Sony Xperia Z1 Compact , but only small on your screen, the rest of specifications corresponded to high-end, same as seen in his older brother, the Sony Xperia Z1 .
However, LG, ignoring that fact, bet again for a number of cuts insiginia regarding your ship , the LG G2, thus setting the LG G2 Mini clearly in the middle range . Then we leave the technical
characteristics of the device: 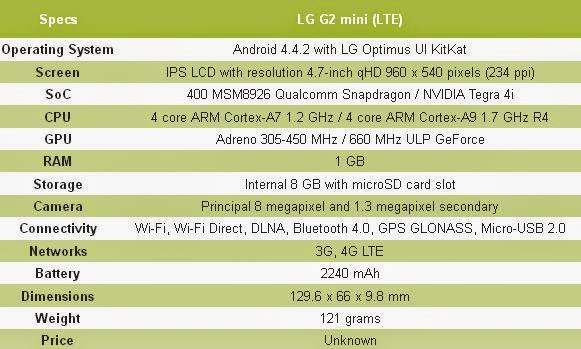 We compared
It's time to compare some of the most important sections that really show us the possibilities of each.shall go!

Without any doubt, if there is a terminal that has highlighted positively in the design section, this has been the HTC One, whose elegant body unibody aluminum endowed the appearance of a premium . Of course, the company did not hesitate to offer a similar look on his little brother , so we could say thatthe HTC One mini has the best design within the average range , although, of course, this is very subjective.

Mind you, Huawei, which already offered one of the best designs with your Huawei Ascend P6 , has also done a great job with the new Huawei Ascend P6, reusing aluminum, and adding a metal frame around its body, makes it very elegant . Furthermore, we can find it in different color combinations, for example, we can find a white model with that framework in gold.
With respect to other rivals, Samsung and Sony and LG are still using plastic in its entirety . The Samsung Galaxy S4 mini just differs with most teams in the firm, forgetting for a moment the size, and so does the LG G2 Sony Xperia mini and M2, which are in line with their older siblings . In the latter design is designed in part to take advantage of that protection to the liquid element, and dust particles .

If we look at the numbers on paper the HTC One mini offers the highest resolution of five teams , reaching 1280 x 720, ie, HD, resulting in a total of 342 pixels on each of its 4 3 inches, well above the figure of its rivals. Furthermore, the SuperLCD 2 technology is synonymous with quality.
The others have to make do with a qHD resolution, that although the Samsung Galaxy S4 mini may be sufficient for the average user because of the diagonal of "only" 4.3 inches, it gets worse when we look at the other teams , which with 4.5 inches on the Huawei Ascend G6, G2 LG 4.7 in 4.8 in the mini and Xperia Sony M2, seems too low.

At this point, we must emphasize the good hardware we see in the Sony Xperia M2 , which includes in its main chamber the large sensor Exmor RS house, this time 8 megapixel . Despite this, we can not conclude which is the best camera, and the smartphone Huawei also makes use of a Sony Exmor sensor RS, specifically the IMX134, also reached the 8-megapixel lens with f/2.0 aperture and 5P. Moreover, megapixel front camera exceeds that of its rivals, with 5.

Meanwhile, HTC decided to bet on your UltraPixel technology in a 4-megapixel camera, the results have failed to agree to most users, with reviews that classified as excellent, while the other cross out mediocre. As for the LG G2 mini and mini Samsung Galaxy S4, both mounted a similar setup , with 8 megapixel sensors for main camera, with 1.3 and 1.9 megapixel secondary, respectively.

Regarding the components that give life to the equipment, we are facing very similar in performance alternatives , and indeed we all make use of Qualcomm products, including Huawei. Thus, we shall consist of the 4 cores ARM Cortex-A7 systems smartphones latest, while HTC and Samsung models also incorporate Qualcomm decide Snapragon 400, but its dual-core Krait versions 300. Adreno GPU 305 is common to all.
We must mention the existence of a mini with LG G2 chipset NVIDIA Tegra 4i , a priori more powerful than the Qualcomm solutions discussed

Thus, all devices enjoy sufficient performance for day to day , but of course, always speaking from the perspective of a user who does not usually do a very intensive use of equipment, such as playing the strongest titles of the moment. This does not mean that we can also have fun with them.

Apparently, the LG G2 mini will be the most updated equipment to its output, as will Android 4.4.2 KitKat, although the HTC One mini is now also getting a dose. The other options will remain pending receive this latest version of the system, and it seems the smartphone of Saamsung could be next.

Each model features the particulate layer of customizing your company , although these layers seem to take an increasingly clean and like native Android course. However, not all choose this as Samsung, TouchWiz continues with a very distinctive look, or HTC Sense and its one of the best rated layer, although it is less intrusive than it was.

As we have seen over the comparison, we are facing devices performance on par, especially in regards to the raw power , and the differences are in details that make the positive point will drift back to one side or another. For example, in the section of the screen we can assume clear winner to HTC One mini, and other aspects such as design, this would be a tie between this device and the Huawei Ascend G6, while reiterating that this aspect is more a personal opinion .
On such an important point as the software is soon to know the support that ultimately count thesesmartphones by their manufacturers , although knowing the habits of some, it is easy to think of what the models that will soon be left in will the lurch.
In short, it seems that it makes sense to cater to the price of each to succeed in the purchase , and in this section is that we can indeed find greater differences clearly remain the models most expensive Samsung and HTC, despite having left Market makes over half a year.
Now, as always, it's your turn to review. Which of these smartphones would you choose if you had to choose a mid-range?

Related : The Best Miid-Range Smart Phones Of The Moment Android In Details