The movie opens in Naurikot- a village in Mustang (400km from Kathmandu) where a third-grade failed "Kaji" has one and only dream of "owning" Maiya- his soltinee (Daughter of maternal uncle). Though he has the first claim to marry his "Mama ko chori" as per a belief in Thakali community, she does not give a shit for the Loafer "Fupu ko chora" may be due to his rude behavior, and he also does not seem the perfect choice for a girl who wish to pursue her study in town. Two other Loafers do everything to support Kaji, they even back him to forcibly take away Maiya to make his spouse: a tradition in Magar community which is now in the verge of becoming obsolete. Enter a guest from Kathmandu, who speaks filmy kind of dialogue with some fishy motives, allures Maiya, troubles Kaji's life and the serious tussle begins with physical assault to long chase. The Kabaddi (one of the popular traditional game in Nepal) chase in the second half of the film changes venue to Kathmandu and the most of the fun shown in the trailer ends to a different turn. Most of us find the first half to be more entertaining but second half does not stop pleasing you till the end with a twist in the story line.
Dayahang Rai with his "gople" attitude is always the best and people adore the Kaji character so much that even when he crosses the limit for troubling Maiya, you are towards Kaji's side (at least I was). http://ikkemunandar.blogspot.com /2012/01/loot-movie-review.html">Loot maker Nischal Basnet has now shown his acting skills in the movie that was not quite foolproof with his cameo appearance in http://ikkemunandar.blogspot.com /2013/05/uma-movie-review.html" style="background-color: lime;">Uma and http://ikkemunandar.blogspot.com /2014/01/anup-barals-directorial-debut-fitkiree.html" style="background-color: cyan;">Fitkiree, yet he believes more in his direction as mentioned as a part of the movie. Female lead Rishma Gurung's innocent performance is also wonderful on the screen, giving a fresh look to the movie alongside such a pristine location. Pleasant humor with such native story of plain love, ethnic tradition, myths, hatred and wise screenplay makes it a fine movie with Director Ram Babu Gurung playing his part quite satisfyingly with no overdone acting and nice presentation. But the lip syncing in the movie fails in many scenes, also including during the only song "Maya khai kasle bujhyo" - a noticeable lapse for such a nice movie. 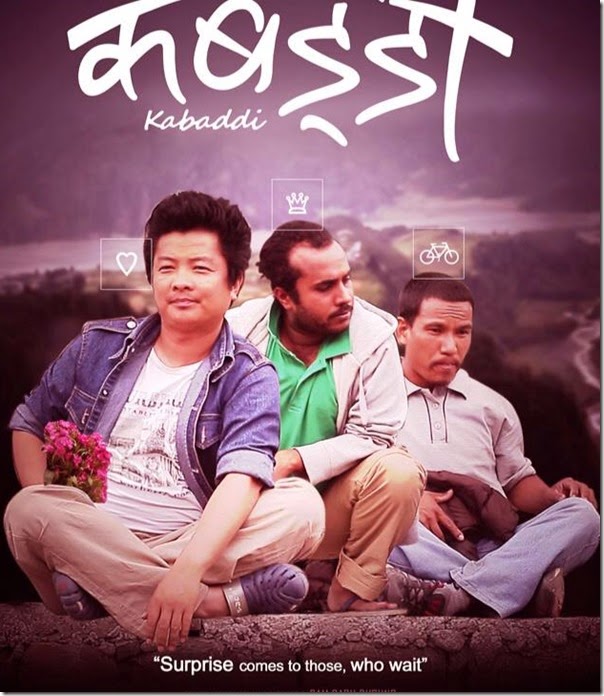 As Nepali people still await  http://ikkemunandar.blogspot.com /2012/01/loot-movie-review.html">Loot  like movies to pour into the cinema hall, Kabaddi meets the level to draw a big attention, making a great start to the cinema industry for the year 2071. A super duper from my side which means a big Yes for the total entertainment.
With the new idea to crowd fund a movie where actors to technical crew take a stake of the profit, it is quite easy to sustain the movie and we need more of such funding or big productions conglomerate for some time to uplift the industry in real sense.
The movie Kabaddi went totally with my intuition as mentioned in the http://ikkemunandar.blogspot.com /2014/04/kabaddi-movie-preview.html">preview- I have written few days back despite a lil' skepticism back then. When the movie started reel-ing inside the full packed QFX hall, laughing gas flew like a wildfire making the "ranga" cum bike ride such a fun that everyone kept laughing and they hailed the work with a huge round of applause. It seems movie crew also enjoyed it as much we appreciate the movie, as known from the clipping of the shooting shown towards the end.

Information about the Kabaddi nepali movie review has been discussed

A few of our information about the Kabaddi nepali movie review, hopefully give more knowledge for you
You have finished reading Kabaddi nepali movie review and many articles about Techno News in our blog this, please read it. and url link of this article is https://ikkemunandar.blogspot.com/2014/04/kabaddi-nepali-movie-review.html Hopefully discussion articles on provide more knowledge about the world of new tech gadgets and Techno News.