Some SIGINT and COMSEC during the Nuclear Security Summit

Some SIGINT and COMSEC during the Nuclear Security Summit

(UPDATED: May 17, 2014)
On March 24 and 25, the third Nuclear Security Summit (NSS) is held in The Hague, the seat of the government of the Netherlands. As 58 world leaders will be present, including US president Obama, the summit takes place under severe security measures.

Here we will take a look at some noticable things on the Signals Intelligence (SIGINT) and Communications Security (COMSEC) front, especially regarding the American president. When some new details or pictures come up, they will be added.

On the morning of Monday, March 24, president Obama flew in aboard Air Force One, accompanied by all the famous vehicles like the helicopters which become Marine One when he is aboard, and the cars of the presidential motorcade. As can be seen in this video, there are actually 4 identical and heavily armored presidential limousines, so two motorcades with each two identical limousines can be formed - so no one knows which one is carrying the president.

One of the last cars in the motorcade is the WHCA Roadrunner which is recognizable by a small satellite dome and a number of VHF whip antennas on a roof platform. Also known as the Mobile Command and Control Vehicle (MC2V), it serves as the communications hub for the motorcade by beaming up encrypted duplex radio and streaming video to a military satellite, which in turn beams that data back down to a ground entry point and through to the switchboard of the White House Communication Agency (WHCA). 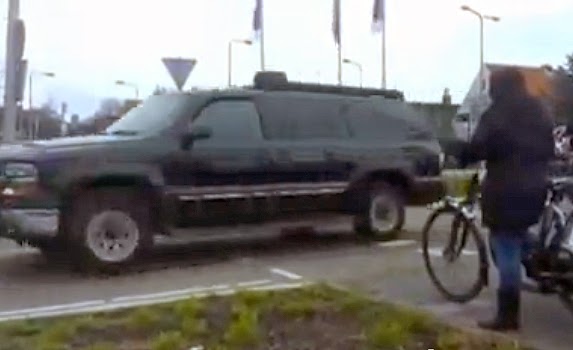 The WHCA Roadrunner arriving in Noordwijk, where Obama is staying
(still from a video by VOLMedia) 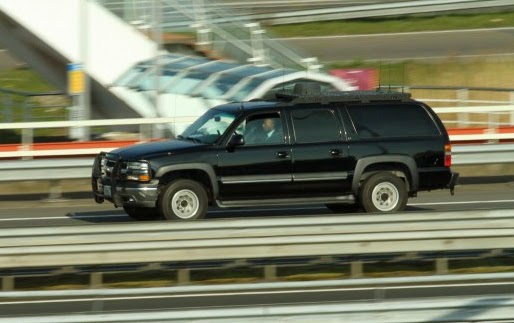 The WHCA Roadrunner on its way from Noordwijk to The Hague
with the satellite dome and 5 VHF antennas on its roof
(photo: madebymaus posted at NUfoto.nl)

Also present is an aircraft most people don't know of and will rarely see. But it was noticed by air traffic spotters: a small US Army Beechcraft RC-12P Huron with tail number 92-13123 entered Dutch airspace around the same time as Air Force One. 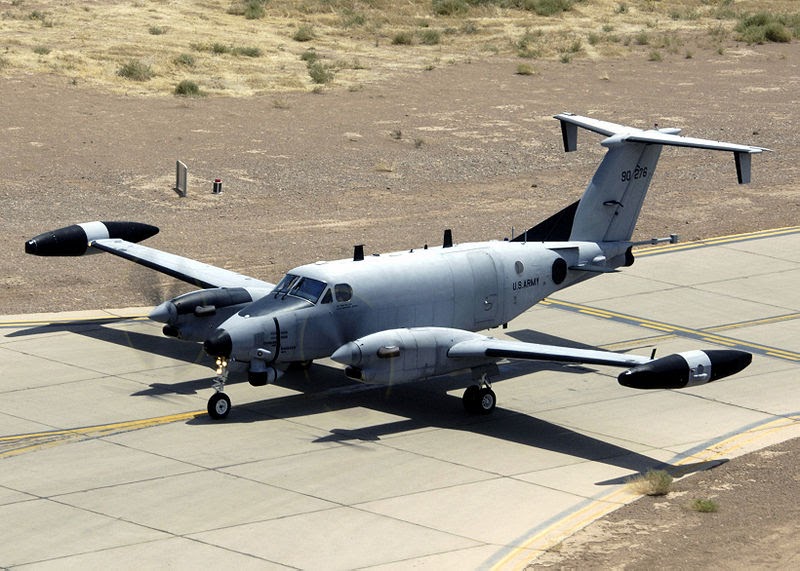 The Beechcraft C-12 Huron is a small twin-turboprop aircraft, which is used for many years by the US Army under its Guardrail/Common Sensor System program. In many different versions, the Beechcraft planes are widely used in war zones like Afghanistan, mainly for collecting Signals Intelligence. For that purpose they have highly specialized equipment on board, like for example http://ikkemunandar.blogspot.com /2013/11/drtbox-and-drt-surveillance-systems.html">DRT devices, which can be used to intercept and monitor short range radio and cell phone communications.

When following the president, the Beechcraft is probably also used as an additional communications hub between for example the presidential motorcade and the White House Communication Agency (WHCA) as this aircraft can also serve as a relay for satellite communications. The mission equipment of the RC-12P version includes datalink capability, and has fibre optic cabling and smaller and lighter wing pods.

Another interesting plane that followed Air Force One is a Boeing E-4B that serves as National Airborne Operations Center (NAOC). It's also known as the "Doomsday Plane" because during the Cold War there was always one of these aircraft in the air to provide a survivable platform in the event of a nuclear attack. Its original codename was "Nightwatch", derived from the famous Rembrandt painting that Obama saw during his visit to Amsterdam.

On March 24, plane spotters noticed an E-4B with tail number 75-0125 following Air Force One when entering European airspace. When the US president travels outside North America, the E-4B lands on an airport within several hundred miles of the president's destination, to be readily available in the event of an emergency that renders Air Force One unusable. It's not yet known where the E-4B landed during the Nuclear Security Summit. 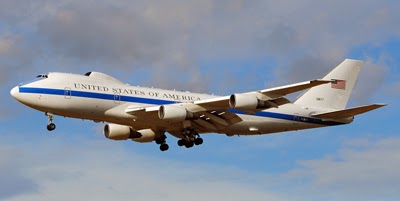 For secure phone calls, president Obama can use his http://ikkemunandar.blogspot.com /2013/04/how-obamas-blackberry-got-secured.html">highly secured BlackBerry, which connects to a secure base station that follows him where ever he goes. In the picture below we can see he also brought his BlackBerry to the opening session of the Nuclear Security Summit on March 24:

Obama and his BlackBerry at the opening session of the Nuclear Security Summit
(photo: Yves Herman/Pool/European Pressphoto Agency)


The WHCA also installs secure wireline phones at every place the president stays. Nowadays that includes a vIPer 'Universal Secure Phone' which can connect through analog, digital or VoIP networks, and a Cisco IP phone that connects to the highly secured Executive Voice over Secure IP-network through dedicated and encrypted satellite links.

Other world leaders will also have brought their own equipment for secure communications with their capitals, including landline and mobile telephones that are able to perform end-to-end encryption of the calls.

For example, German chancellor Angela Merkel can use her http://ikkemunandar.blogspot.com /2013/10/how-secure-is-merkel-phone.html">secured BlackBerry 10 smartphone or a landline secured by the Elcrodat 6-2 encryption device. The French president François Hollande has a Teorem secure cell phone and can also place secure calls through a wireline DCS 500 telephone set.

The British prime minister David Cameron can place secure calls by using a Brent 2 secure telephone. Apparently he also uses one or two mobile phones, but from the picture below it's difficult to recognize their make and type. It's also not clear whether they have any encryption capability. 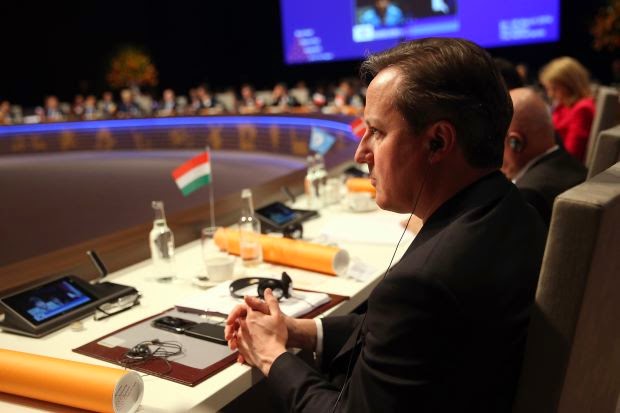 There was some speculation about two Russian crab fishing trawlers lying in the harbour of Scheveningen, which is a small port next to The Hague. People noticed that these ships had so many antennas, and thought they could be Russian spy ships, trying to intercept communications from the world leaders attending the Nuclear Security Summit. 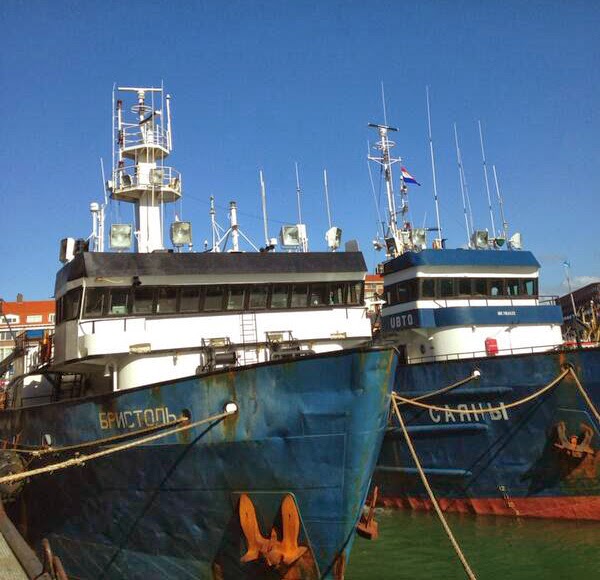 However, it stated out that both ships, from Petropavlovsk-Kamtsjatski in the far eastern part of Russia, came in three weeks ago having problems with their engines. This was solved rather quickly, but then problems with some neccessary certificates appeared, and both ships had to stay until that issue has been cleared.

Regarding the antennas, some people say that they are quite ordinary HF and VHF antennas, which were used by ships before maritime satellite communication was introduced.

During the Cold War, the Soviet Union had a large fleet of fishing trawlers that conducted covert signals intelligence gathering. Nowadays, known Russian spy ships are often much larger military vessels, which don't have to go into the territorial waters of a country they want to monitor, but can operate safely from international waters. An example is the Viktor Leonov SSV-175 from the Vishnya class in the picture below, but a ship like this one has not been seen near the Netherlands. 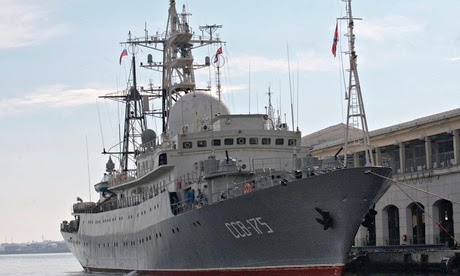 Update:
About two months later, the Dutch Military Intelligence and Security Service (MIVD) said that after the pictures of the two Russian trawlers were posted on Twitter, they took a closer look at them and had to conclude these ships were too far away from the Summit location to impose a eavesdropping threat.

Links and Sources
- 618 photo's of Obama in Noordwijk
- Photo's of the NSS 2014 at Flickr
- Photo gallery of Obama's trip to Europe and Saudi Arabia
- Russian spy ships? Scheveningse haven door Russen geannexeerd
- More about The Beast and its Escorts
- WashingtonPost.com: Secret Service agents on Obama detail sent home from Netherlands after night of drinking
- DailyMail.co.uk: Revealed: INSIDE the President's $223m 'DOOMSDAY PLANE' that protects him against nuclear war, asteroids and terror attacks

A few of our information about the Some SIGINT and COMSEC during the Nuclear Security Summit, hopefully give more knowledge for you

You have finished reading Some SIGINT and COMSEC during the Nuclear Security Summit and many articles about Techno News in our blog this, please read it. and url link of this article is https://ikkemunandar.blogspot.com/2014/03/some-sigint-and-comsec-during-nuclear.html Hopefully discussion articles on provide more knowledge about the world of new tech gadgets and Techno News.

Related : Some SIGINT and COMSEC during the Nuclear Security Summit