What is the Difference Between GSM and CDMA Tracfones? 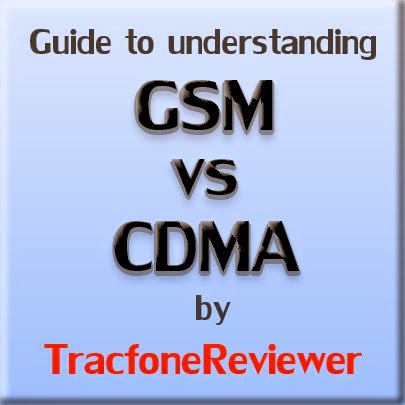 Tracfone is a low cost, prepaid cell phone service provider that uses other major cell service towers from Verizon, Sprint, AT&T and others to provide service.

Tracfone offers two general types of phones - CDMA and GSM. But what is the difference, and how can you tell which one you have, and which one you should get? Get those questions and more answered right here!

What Are GSM and CDMA Cell Phones?

Let's start by giving a little more information about GSM and CDMA:

GSM, which stands for Global System for Mobile communication, is the more popular cell phone standard worldwide, but not as much here in the United States. AT&T and T-Mobile use GSM networks for all their cell phone service, and Tracfone cell phones that use GSM run off of one of those two major carriers.

CDMA stands for Code Division Multiple Access and is less popular world wide, but more popular in America. It is used by Sprint and Verizon for their cell phone service, and any Tracfone devices that use CDMA run off one of those two networks.

So, GSM or CDMA cell phones are simply cell phones that run on one of those two networks.

How to Tell If You Have a GSM or CDMA Tracfone:

This is a common question with Tracfone users that has a very simple answer.

If your cell phone ends with a 'C' it uses the CDMA Network. An example is the LG 505C. Notice the 'C' at the end of the name. All Tracfone mobile devices that end with "C' use either Verizon or Sprint networks.

If your cell phone ends with a 'G' it used the GSM Network. An example is the http://ikkemunandar.blogspot.com /2012/12/tracfone-review-lg-840g.html" target="_blank">LG 840G. All Tracfone cell phones that end with this 'G' use the GSM network, which is either T-Mobile or AT&T. GSM phones have been very popular with Tracfone, but recently there has been a wave of Android smartphones for Tracfone and they all use Verizon CDMA service.

For more on these smartphones, visit our http://ikkemunandar.blogspot.com /p/cell-phone-reviews.html">Cell Phone Reviews page where we have a full list including all of the recent Android smartphones..

Should I Buy a GSM or CDMA Tracfone?

This is also a question we get here at TracfoneReviewer quite often. Many people are unsure which type of phone to get, those ending with 'C' or 'G'?

Here is what it comes down to: As mentioned above, Tracfone cell phones ending with 'C' use the CDMA networks of Verizon and Sprint and phones ending in 'G' use AT&T and T-Mobile. Thus, you should get the phone that will use the network that has the best coverage in your area.

This may take a little research to discover, you may want to talk with friends or look up information online, but when you have found which major cell phone provider works best in your area, use the cell phone from Tracfone that will use that network.

Many cities have either GSM or CDMA as the more dominant provider for a variety of reasons, so be sure to find out which will work better. You can go on the Tracfone website and shop for cell phones there, where they will ask for your zip and determine which type of phone you should get.

The Android powered smartphones that Tracfone has recently released only use Verizon networks, so be sure to evaluate carefully if Verizon service is good in your area before getting a smartphone.

In the end, do a little research and you should find which type of phone will work best in your area.

Tracfone cell phones use either GSM or CDMA. Below we will share a list of cell phones from Tracfone organized by which type of network they use. This list does not include all of Tracfone's devices, but many of the most popular ones.

There are many more cell phone options from Tracfone besides these, but this is just a sample of cell phones categorized by which network they use.

Visit your http://ikkemunandar.blogspot.com /p/cell-phone-reviews.html">Cell Phone Reviews page for links to all our reviews.

We hope this helped to answer questions, and ifyou have any more, just ask them in the comments. Share this with others who also might find it beneficial!

EDIT: For those who might be looking for zip codes that will allow you to shop for CDMA cell phones on the Tracfone website, here is one that worked: 89301 - Ely, NV.

Information about the Tracfone GSM Vs. CDMA Phones has been discussed

A few of our information about the Tracfone GSM Vs. CDMA Phones, hopefully give more knowledge for you
You have finished reading Tracfone GSM Vs. CDMA Phones and many articles about Techno News in our blog this, please read it. and url link of this article is https://ikkemunandar.blogspot.com/2013/07/tracfone-gsm-vs-cdma-phones.html Hopefully discussion articles on provide more knowledge about the world of new tech gadgets and Techno News.