FORTUNE -- The year in review report issued Monday by Ooyala, a venture-funded video services company founded by former Google (GOOG) employees, is 27 pages long. But the only page that's getting any attention is the one that shows Apple (AAPL) iOS users spending twice as much time watching videos on their devices as Android users. It's a finding, Ooyala points out, that seems to fly in the face of IDC market share data that had Android outselling Apple in 2012 by more than three to one.
Why the discrepancy? We've seen several explanations: 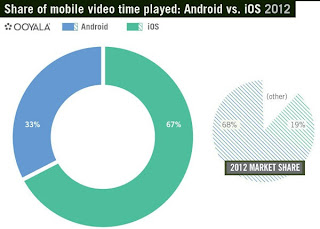 Ooyala is not a household name, but the company says it delivered video to nearly 200 million users in 130 countries last year and measured billions of video events to produce its report

Information about the Chart: Apple users watch 2X as much video as Android users has been discussed