Verizon's new understanding of the value of its fiber-rich fixed networks (supports business cases ranging from enterprise services to small cell backhaul, fixed wireless and mobile 5G) now mirrors the cable TV industry's belief in the value of its consumer triple-play networks.
That is to say, the same network required to drive gigabit consumer Internet access creates the foundation for a dense network of small cells to support 5G services.
Where we once talked about "fiber to the home" or "fiber to the building," or "fiber to the neighborhood," it now is generally understood that the same fiber "to lots of places" creates the possibility of backhaul for small cells that are the foundation for both mobile 5G and new fixed wireless services.
So incentives always matter, when regulators and policymakers want robust investment in next-generation networks. Any policies that promote more-extensive gigabit or fiber investments necessarily ease the business case for tomorrow's services.
But policymakers also want more competition. The problem is that competition and investment tend to be rival goods in competitive telecom markets. Success on one dimension tends to diminish the other.
Consider the European Community broadband targets, which call for gigabit access by 2025 for “all schools, transport hubs and main providers of public services as well as digitally intensive enterprises.”
The problem: the EC itself believes this will cost about €500 billion ($558 billion) in investment over the next eight or nine years.
However, the costs of building such a network are high, with the commission estimating that there is a shortfall of €155bn of the €500bn of investment that could be required to deliver a so-called “gigabit society”.
Right now, investment in next-generation networks might fall short of that goal by about €155 billion ($173 billion).
As plans for 5G mobile networks advance, additional spectrum--and lots of it--will be needed.
Spectrum below 1 GHZ and between 1 GHz and 6 GHz will be important. But spectrum in millimeter wave regions will be crucial, as there is not enough additional bandwidth available in low bands (below 1 GHZ) or in the middle bands (up to 6 GHz).
That means the cost of acquiring or using spectrum will be important drivers of how much investment happens, and how fast.
The planned 5G networks are expected to serve up to one million connected devices per square kilometer, about a one thousand-fold (three orders of magnitude) more than current levels.
Though investment will not be linear (three orders of magnitude more investment to support three orders of magnitude more devices), the incremental investments will be quite substantial.
High spectrum prices, tax policies, mandatory fees and other conditions of doing business also shape the possible business models and therefore the magnitude and timing of investment.
Telecommunications always has been a highly-regulated business, where government decides whether market entry is possible, by whom, under what conditions, what prices can be set and what services can be offered.
Creation of incentives to invest is now, and always will be, a crucial element of policy, especially if 5G requires use of small cells, on networks that are very dense users of optical fiber.
Looking only at service provider cell sites (not enterprise or consumer), millions of new sites will be added globally by about 2020.
If in some urban areas the density is roughly “ http://ikkemunandar.blogspot.com /2016/08/fiber-to-light-pole-might-be-required.html" style="text-decoration: none;">fiber to every other light pole,”
If, as expected, millimeter wave small cells have a transmission radius of about 50 meters (165 feet) to 200 meters (perhaps a tenth of a mile), it is easy to predict that an unusually-dense backhaul network will have to be built (by mobile network standards).
In the past, mobile operators have only required backhaul to macrocells to towers spaced many miles apart. All that changes with new small cell networks built using millimeter wave spectrum (either for 5G mobile or fixed use, or for ISP fixed access).
Keep in mind that street lights are spaced at distances from 100 feet (30.5 meters) to 400 feet (122 meters) on local roads.
As a rough approximation, think of a small cell, in a dense deployment area, spaced at roughly every other street light, up to small cells spaced at about every fourth light pole.
That is a lot of new cells, with a low-cost backhaul requirement. That is why dense fiber networks now are seen as a business asset by Verizon and Comcast, for example. Very few other providers will be able to connect “every other light pole” to high-capacity backhaul, affordably.
Among other things, 5G networks should dramatically expand what we have traditionally viewed as the “fiber to tower” backhaul market. There are about 300,000 macro cell sites in the United States and perhaps 200,000 towers.
It remains unclear how many 5G or 4G small cells ultimately will be built. But it is reasonable to assume almost all the growth will come from putting small cells on existing structures, not installing towers.
And that is why cable operators believe small cell backhaul will be an important new business opportunity. 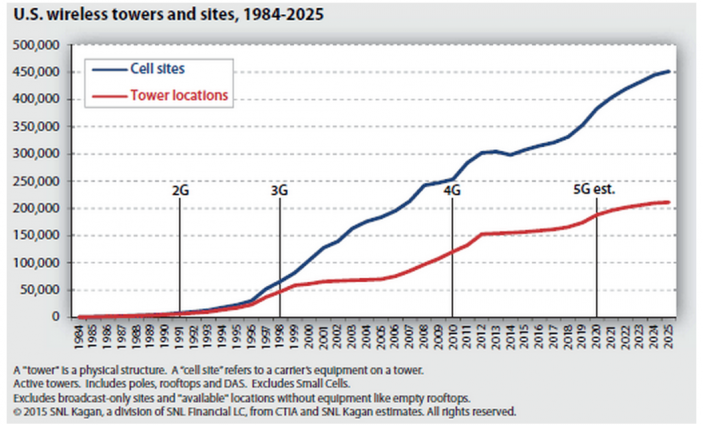 Related : Fast Next-Generation Network Deployment Has to Balance "Competition" and "Incentives for Investment"