BISMILLAHI.. IN THE NAME OF ALLAH LORD OF MANKIND, THE MOST MERCIFUL.
I know some people may ask why Islamic category on Mujaheed Nas Blog; and others may say Mujaheed Nas blog is all about technology then why Islamic category. OK Let me clear your doubt. Mujaheed Nas Blog is beyond Technology. I have came to realized that whatever someone's write may prove his reality or agains him. And what has spoken will never be unspoken. If you can contribute on your religion then why should i not contribute on mine? speaking about islam or religion issue is the thing i love most in my life. Like sharing idea about religion. Probably there are two reasons for Islam Category on this blog. 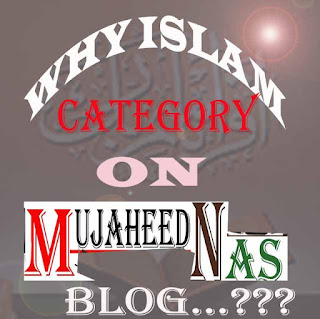 Firstly; Mujaheed (My name) means struggle in the name of Allah. Am mujaheed by name so i think is good to reflect my name or act like the meaning of my name. whenever i spread the word of Allah and his messenger Prophet Muhammad Peace be upon him Allah will reward me and i believed it will benefit many chaps, muslim or non muslim, males or females and Allah will reward me for good deeds in this world and even after my death.

Secondly;  there is misunderstanding about the religion Islam. Some of the Non muslim misunderstand the religion of Islam and also very few among Muslim also misunderstand the real meaning of Islam especially when it comes to Jihad. This is perhaps the biggest misconception about Islam, especially given the constant stereotyping by the media. The media portrays as a terrorist any Muslim who fights regardless of whether they fight justly or unjustly, or whether they are oppressing others or being oppressed. So the question that comes to mind is: Does Islam encourage terrorism? Certainly not! Islam totally forbids and condemns the misguided acts of vigilantes that target innocent civilians .
Of course, Islam does not remain silent in the face of oppression, injustice and humiliation. Any religion or civilisation that does, would never survive — but it certainly does not condone attacks against defenseless men, women and children.

Allah says: “Fight in the cause of Allah against those who fight you, but do not transgress limits. Allah does not love transgressors:’ Quran 2:190

Even during times of war, Islam lays down strict rules. For example, a Muslim is not allowed to harm or kill those in a peace treaty with Muslims, non-combatants, women, minors, servants, the blind, monks, the elderly, those physically incapable of fighting, and the mentally ill. In fact, Muslims are not even allowed to damage crops and vegetation during times of war! These noble ethics were, and still remain, unheard of in any army.
And Insha Allah if Allah spear my life i will tell you everything i know about Islam. I Pray for Almighty Allah to guide us to the right faith. forgive us in all our wrong deeds, Give us life when it's better than us and grant us death when death is better than our lifes.
So many attempts have been made to portray Islam as a religion that is both strange and foreign to people’s normal instincts and values. In deciding upon what to make of Islam, remember this:

• Who stands to gain from perpetuating such misconceptions and untruths?

• Have you researched about Islam yourself, as opposed to what you have heard from others and the media?

• Would millions of people all over the world embrace Islam if it was a harsh and inhumane way of life?

A few of our information about the WHY ISLAMIC CATEGORY ON MUJAHEED NAS BLOG, hopefully give more knowledge for you
You have finished reading WHY ISLAMIC CATEGORY ON MUJAHEED NAS BLOG and many articles about Techno News in our blog this, please read it. and url link of this article is https://ikkemunandar.blogspot.com/2016/08/why-islamic-category-on-mujaheed-nas.html Hopefully discussion articles on provide more knowledge about the world of new tech gadgets and Techno News.