Home » Islam » What Qur'an and Bibble say about Hijab

What Qur'an and Bibble say about Hijab

What Qur'an and Bibble say about Hijab

WHAT DOES THE QURAN AND BIBLE SAY ABOUT HIJAB?
The word "Hijab" is an Arabic word. It simply means 'to veil,
to cover or to screen'. Hijab is a veil that covers the head and
chest. And it is also simply meant as "head cover". Hijab
encompasses more than just a dress code. It is part of
dressing for women of ages and not just religious, seasonal or
ceremonial wear. In the Qur'an, veiling or covering is an act of
submission to Allah and also indicates the highest status of
believing women.
"O Prophet! Tell your wives and daughters, and the believing
women, that they should cast their "Jalabib" over their persons
( when out of doors): that is most convenient, and they
should be known ( as such) and not molested" ( Holy Qur'an
33: 59).
The Arabic word used in the above verse of the Qur'an is
'Jalabib' and the singular form is 'Jilbab'. Jilbab means a
loose outer garment, a long gown covering the whole body or
a cloak covering the neck and bosom.
Today, many Christians criticize and mock Islam and Muslims
for allowing Muslim women to wear Hijab. They think that
women in Islam are oppressed or intimidated because men
forced them to wear Hijab. How about the millions of Muslim
bankers, Corp members, Medical practitioners, Sport-oriented
people in the West who put on Hijab? Can men force them to
do so in the west?
In Christendom, Nuns through out Christian history have been
recognisable by their distinctive head coverings and many of
which resemble Muslim Hijab. A nun covers her head because
she is seen as "a bride of Christ". Many Catholic women
choose to cover their heads to emulate the virgin Mary. Mary
the mother of Jesus is seldomly seen with Hijab in Christian
movies. She also covered her head and hair in normal life
according to the Jewish customs of the time. In the Bible, it is
very interesting that head covering for Christian women is a
sign of authority, respect and modesty. Now let us see what
the Bible say about covering women's heads:
"But every woman that prayeth or Prophesieth with her head
uncovered dishonoureth her head: for that is even all one as if
she were shaven. For if the women be not covered, let her
also be shorn: but if it be a shame for a woman to be shorn:
but if it be a shame for a woman to be shorn or shaven, let
her be covered......... For this cause ought the woman to have
power on her head because of the angels" ( 1 Corinthians 11:
5-10, KJV).
"And Rebekah lifted up her eyes and when she saw Isaac, she
lighted off the Camel. For she had said unto the servant, What
man is this that walketh in the field to meet us? And the
servant had said, It is my master: THEREFORE SHE TOOK A
VEIL AND COVERED HERSELF" ( Genesis 24: 64-65, KJV).
If Christian Association Of Nigeria (CAN) disliked the use Hijab
for their women, they should henceforth know that wearing
Hijab is part of day to day dressing of Muslim ladies or
women and was also part of fundamental rights of Muslim
female students as it is written in Section 38 of the 1999
constitution Of The Federal Republic Of Nigeria With
Amendments 2011. So, how does the use of Hijab by female
Muslim students affect the practice of Christianity? NO WAY... 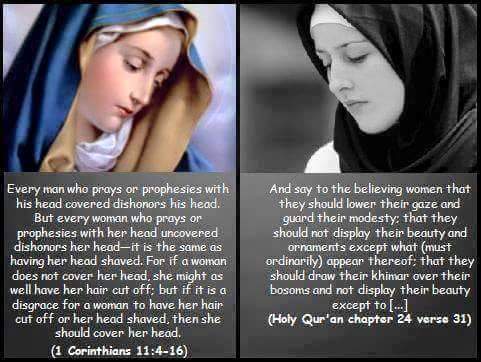 A few of our information about the What Qur'an and Bibble say about Hijab, hopefully give more knowledge for you

You have finished reading What Qur'an and Bibble say about Hijab and many articles about Techno News in our blog this, please read it. and url link of this article is https://ikkemunandar.blogspot.com/2016/08/what-qur-and-bibble-say-about-hijab.html Hopefully discussion articles on provide more knowledge about the world of new tech gadgets and Techno News.

Related : What Qur'an and Bibble say about Hijab