Home » Germany » Pictures from inside the German intelligence agency BND

Pictures from inside the German intelligence agency BND

Pictures from inside the German intelligence agency BND

(Updated: June 12, 2014)
The German foreign intelligence service Bundesnachrichtendienst (BND) is moving to a brand new headquarters in Berlin. Here we show some unique pictures from inside the former headquarters in the village of Pullach and also give an impression of what the new building looks like.

Unlike for example the United States and the United Kingdom, Germany has no separate agency for collecting Signals Intelligence (SIGINT) - this is done by the BND, and as such this agency is a 3rd Party partner of NSA since 1962 and also participates in the http://ikkemunandar.blogspot.com /2013/12/14-eyes-are-3rd-party-partners-forming.html">SIGINT Seniors Europe or 14-Eyes group.

Since its formal creation in 1956, the Bundesnachrichtendienst had its headquarters at a 68-hectare compound in Pullach, a village near Munich in the southern province of Bavaria, which was initially build as a model village for staff members of the Nazi party in the years 1936-1938. On the eastern part of the compound there are nowadays also a number of modern office blocks:


As a farewell to this old headquarters, the German photographer Martin Schlüter was allowed to take pictures of almost every corner of the complex, but only at night, when there were no employees present. His pictures now available in a book called "Nachts schlafen die Spione" (at night the spies are sleeping), published by the Sieveking Verlag.

Pictures from the book were shown in the German television magazine TTT - Titel, Thesen, Temperamente, which made it possible to take the following screenshots of those that show some of the telecommunications equipment used by the BND (click the pictures to enlarge).


One picture shows a larger room which is used as an operations center with all the common stuff, like various computers, large video screens and teleconferencing equipment: 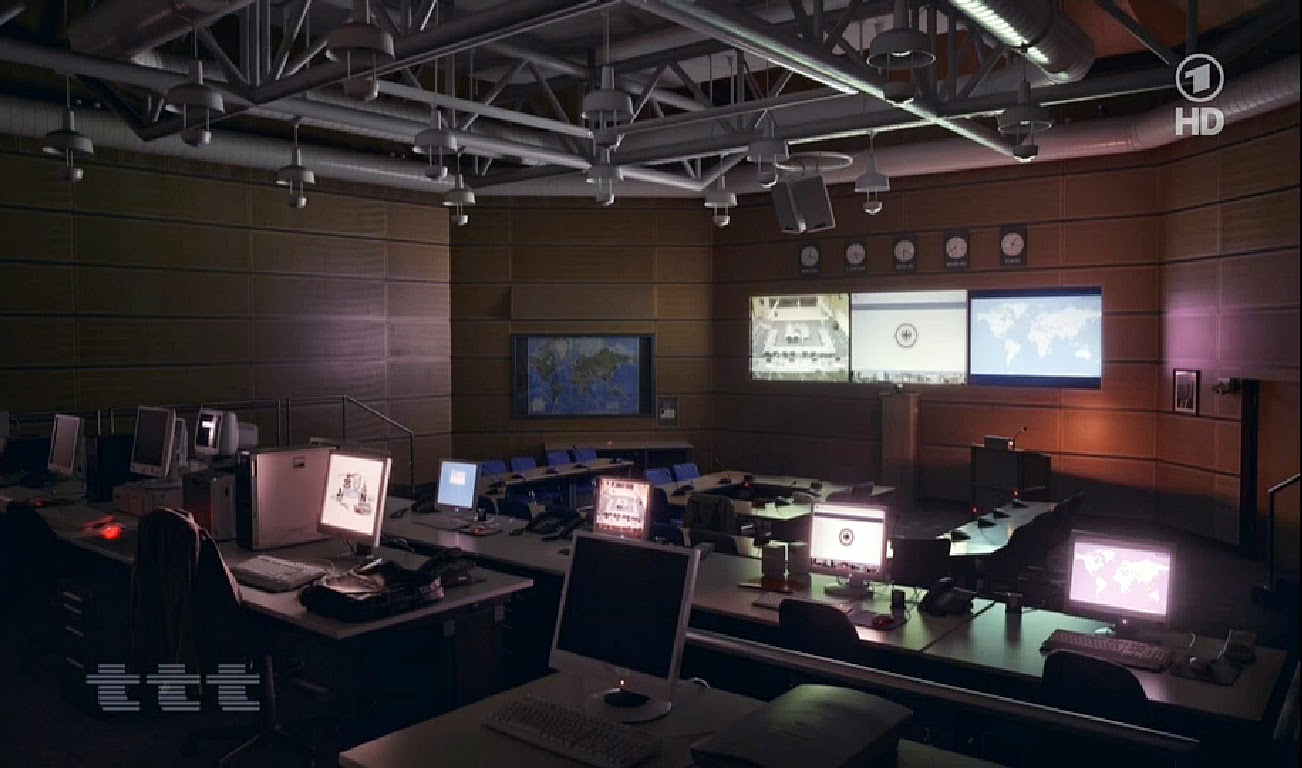 In the next picture we see a smaller operations center room with desks and a lot of computer screens: 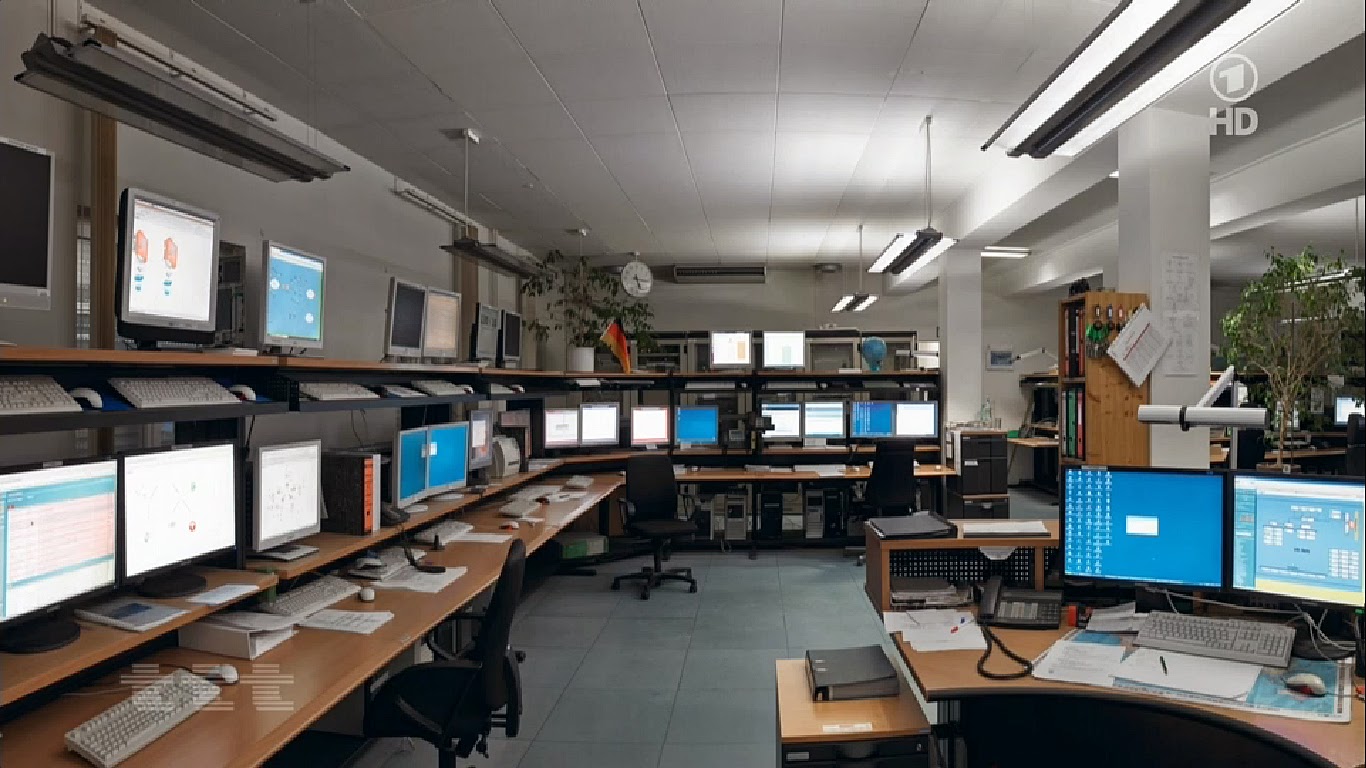 We see that every monitor has its own keyboard and mouse, which seems not very practical. In the US for example, military and intelligence agencies use so-called KVM-switches, which allows users to work on multiple computers and/or terminals of physically separated networks with just one keyboard, video screen and mouse.


A close up of the previous picture gives a somewhat more detailed view of the equipment: 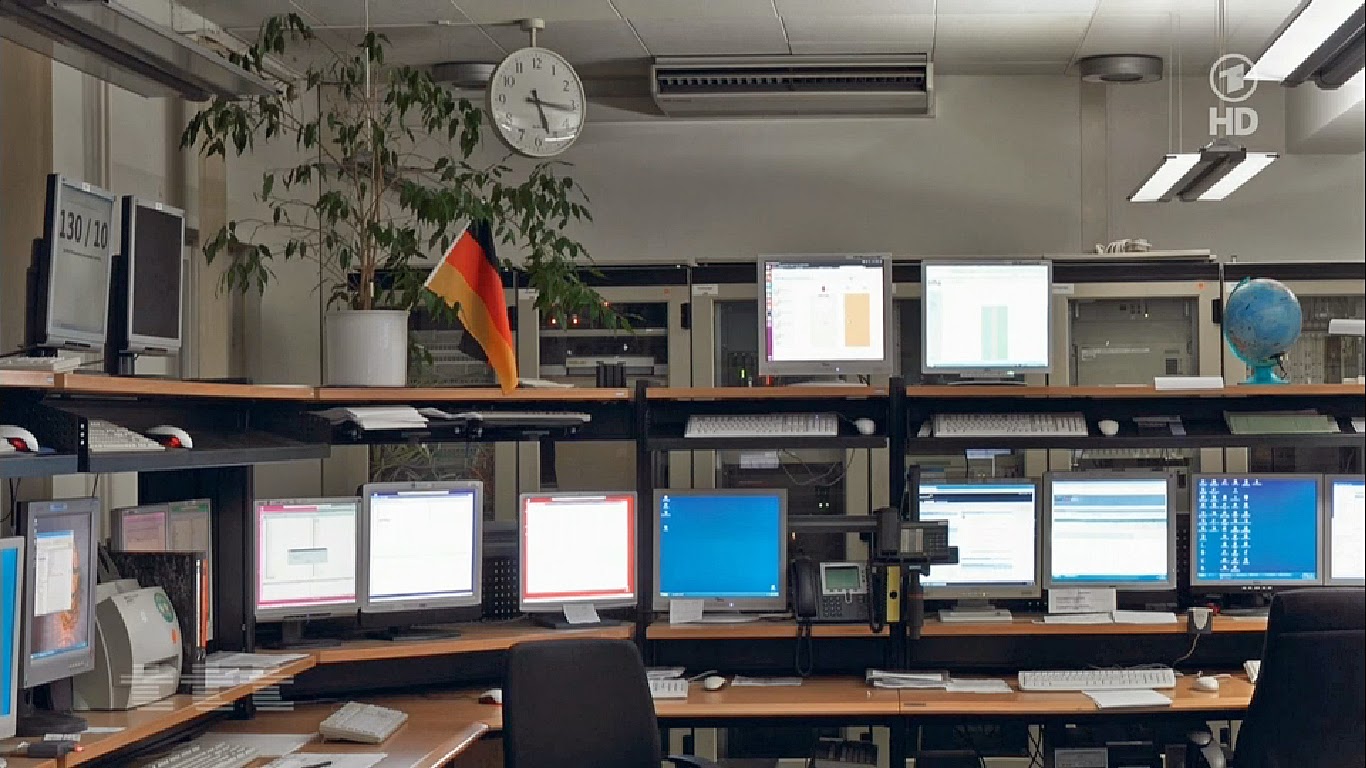 On the left there are computer screens which show content inside a red and with a blue border. This most likely indicates the classification level of the network they're connected to:

In the center we see two telephones: at the left a Cisco Unified IP Phone 7961 and at the right a rather common looking but yet unidentified office telephone, which can be seen in the other pictures too. The Cisco phone is for a Voice over IP (VoIP) network, where the other one is probably part of a traditional Private Branch eXchange (PBX) internal telephone system.

In these pictures we see no secure telephones, ones that are capable of encrypting calls by themself, like the ELCRODAT 5-4, made by the German manufacturer Rohde & Schwarz. Probably BND uses network encryptors to secure the calls before they leave the internal network.


That there's also some amount of crazyness, can be seen in this picture of an office room, used by a BND employee who cleary is a hardcore fan of Elvis Presley: 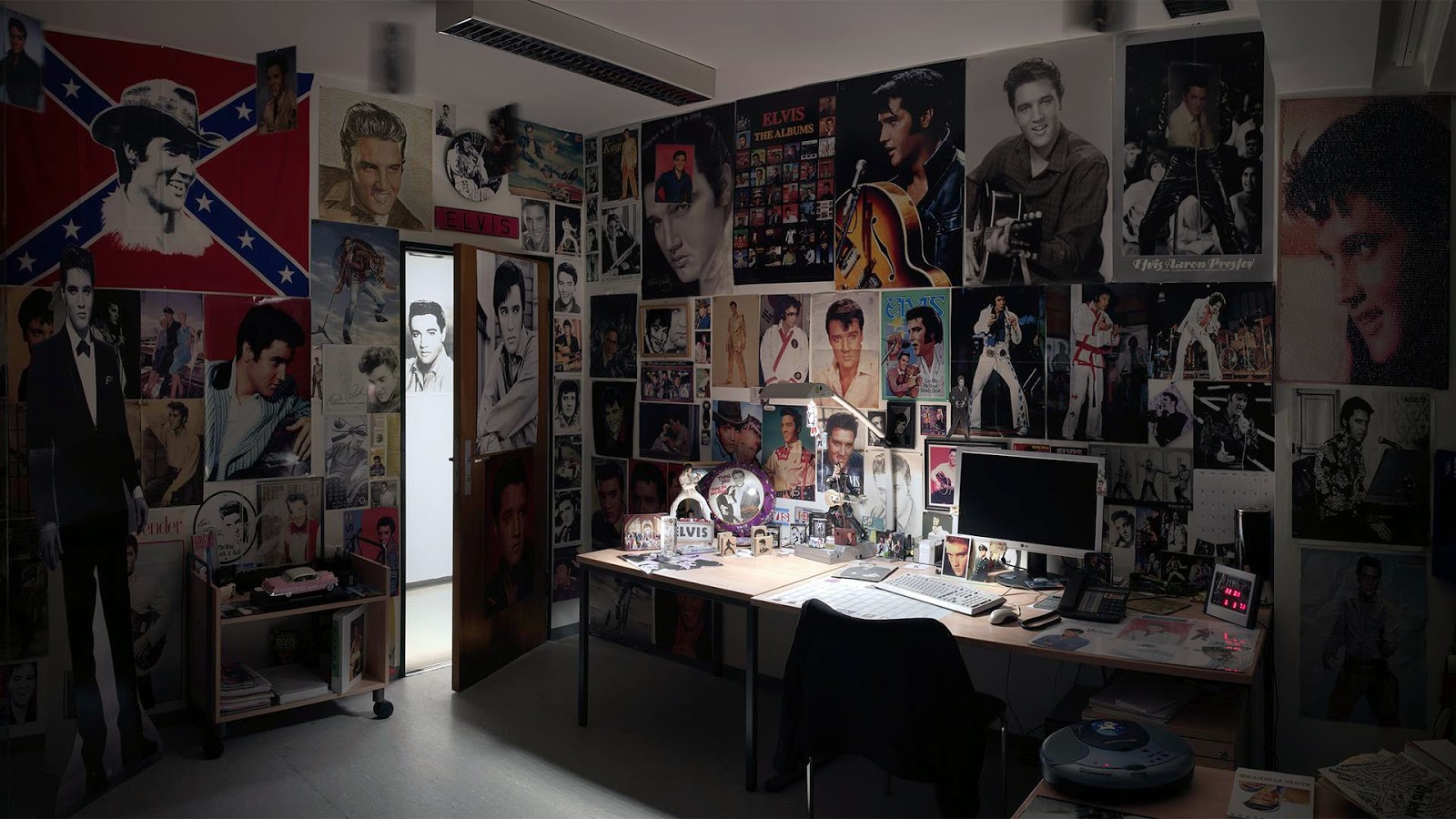 The new BND headquarters is a huge office building at the Chausseestraße in the centre of Berlin. The construction started in 2006 and the overall costs for the building and moving the inventory of some 6000 employees are estimated at 1,3 billion Euro.

The architecture expert Niklas Maak points to a striking difference between the former and the new headquarters: in the past, the enemy was known, the communists from the Warsaw Pact, it was known where they came from, and hence the intelligence agency was hidden in the Bavarian woods. Nowadays, enemies like terrorists and hackers are unvisible and could be everywhere, but the BND is now as visible as it can be, almost as to scare them off. 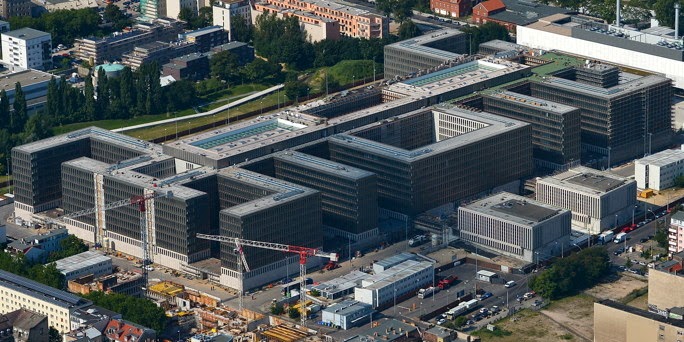 In the new building each employee has a desk with two computers and a telephone, as can be seen in this picture: 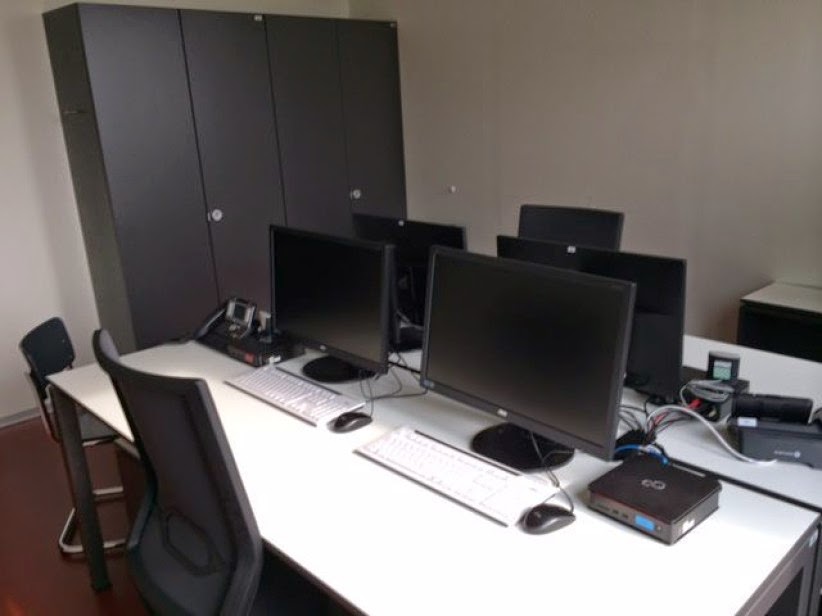 There are two wide-screen monitors, each one with its own keybord and mouse connected to a computer device. Apparently the BND still doesn't want to use KVM switches.


Update:
Initially, the computer devices looked like thin clients, which just create a virtual desktop environment. All files are stored at centralized servers, which also makes it more easy to control and limit the access to sensitive and secret documents. But later, a reader recognized them as being Fujitsu ESPRIMO Q910 mini PC's, which are small but fully equipped personal computers. They also have usb-ports, which would allow to connect thumb drives to them.

One of the thin clients mini PC's has a red and the other one a blue sticker, which probably once again denotes the classification level of the network to which it connects:

The telephone on the desk is a Alcatel-Lucent 4068 IP Phone or a similar model, which is a high end full-featured office telephone for Voice over IP networks. Alcatel was a major French telecommunications company which merged with the American telephone manufacturer Lucent Technologies in 2006.

It seems somewhat strange for an intelligence agency to use telephones that are made by a foreign company, as for example the German company Siemens manufactures telephony equipment for almost a century.

A few of our information about the Pictures from inside the German intelligence agency BND, hopefully give more knowledge for you

You have finished reading Pictures from inside the German intelligence agency BND and many articles about Techno News in our blog this, please read it. and url link of this article is https://ikkemunandar.blogspot.com/2014/05/pictures-from-inside-german.html Hopefully discussion articles on provide more knowledge about the world of new tech gadgets and Techno News.

Related : Pictures from inside the German intelligence agency BND