Hybrid cloud: Four scenarios to optimize your IT resources

Hybrid cloud: Four scenarios to optimize your IT resources

The use of platforms as public cloud deployment option for applications is often approached from a binary point of view: "The application has to be deployed in the cloud or stored on site? "This approach is misleading because many companies evaluate the relevance of public cloud only for the examples most appropriate to use, and often use it as an additional computing resource.
The transition to the cloud will lead companies to find a pragmatic balance between using their own internal infrastructure, often reassigned to building a private cloud, and use the facilities provided by service providers of public cloud. This is called cloud computing hybrid.
Workloads easier to move between the public and private cloud 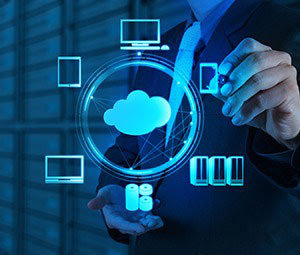 For the hybrid cloud a reality, workloads should be easy to move between private and public infrastructure. The transformation of the provisioning of data center is a precondition for this.
According to a recent study by Quocirca ( In demand - The culture of online services provision), this process is already well under way: 85% of companies report that they are currently using server virtualization and, in many cases, it is with the aim to pool resources in pools to be shared among several applications. In other words, IT departments are creating their own private cloud.
This has two major advantages for businesses. This allows them, on the one hand, to increase efficiency in the use of equipment and the processing power of their own data centers, and on the other hand, enhance the mobility of their application workloads. These can be moved from one datacenter to another private or beyond the data center to take advantage of the public cloud resources.
Supplement internal capacity to meet
With this flexibility, companies no longer need to invest in new data centers and IT infrastructures to remove more and more of their applications.
In this context, the use of public cloud often seek to supplement internal capabilities to meet the needs. Some key examples of using the hybrid cloud:

1 - The public cloud as a platform failover

Whatever the result obtained by comparing the cost of public cloud and private cloud, one thing is certain: it is unnecessarily expensive to maintain an infrastructure to battery unused for business continuity in the event of failure of flat platforms usual execution. The same resource can be rented from a public cloud provider for the rare occasions when it becomes necessary. Rely on a public cloud provider is a much cheaper solution than having a redundant infrastructure disaster.

Many companies are experiencing times of the week, month or year, or simply unforeseen events, which lead to an exceptional increase in the workload of an application. When this happens, it is expensive to have in-house the additional capacity required. It is much more economical to have a contract with a service provider cloud to provision the new application workloads as needed.
Service providers can meet these needs because they have many customers with peak loads occur at different times, and they can reallocate resources at a relatively low cost.

3 - Preparing for an unexpected success (or failure)

The launch of a new activity, such as a new website retail or a new application on social media, is an adventure after unpredictable. What will happen if success is faster than expected? What will happen if they fail? The two cases are very common. Therefore, what should be the amount of the initial investment in the underlying infrastructure?
If a platform of public cloud is used, this investment is very low. Risks associated with a new business are much easier to justify if the expenditures are minimal, and if the project succeeds, the costs to the service provider cloud seem dwarfed by the revenues generated.
Such opportunities should stimulate innovation within the company: more new ideas can be tested because the risk and cost of failure are minimized. Once the commercial relevance of the project checked, it may be envisaged to use internal resources dedicated.

4 - The public cloud as a test bench applications

Applications are often developed on dedicated servers, strictly isolated execution environments. If it is possible to test most of the features in such environments, it is not the case scalability. Test a new version of the code in a runtime environment is risky, because it can affect the application currently online. Some companies may make these night operations, but many applications are now running 24x7.
Platforms of public Cloud provide an ideal environment to perform such tests. Resources can be allocated for the test environment matches as much as possible to the real environment as well as to test the new software.
Conditions are ripe for a massive influx of workloads private cloud to the public cloud, which will result in the majority of cases a balancing between the two. Many companies admit that they need help to make this transition. In a study commissioned by Quorcica Attenda and published in 2013 ( The mid-market conundrum ), only about 25% of UK midsize considered themselves well prepared for the use of public cloud services.
Strengthen innovation and agility
The majority of them wanted help to implement business continuity programs, having the freedom to focus on application flexibility rather than the establishment of platforms. For these purposes, they planned to transfer more and more workloads to third platforms.
In many cases, the platforms selected will be those tenors of cloud computing, but Quorcica study shows that customers seek assistance from service providers to support this transition.
The transition to the hybrid cloud can take many forms, but all companies must be considered if they are to have any chance of achieving the goal many of them have set: to strengthen their capacity for innovation, agility and competitive advantage by optimizing the use of IT resources.

Information about the Hybrid cloud: Four scenarios to optimize your IT resources has been discussed

Related : Hybrid cloud: Four scenarios to optimize your IT resources