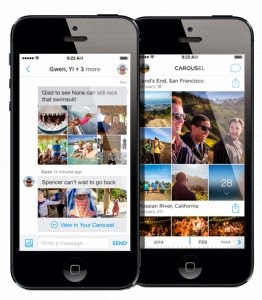 The officials explained the service, at a news conference Wednesday that a copy "Android "from the application" Mail Box "will be available beginning today for users of smart devices operating system being developed by" Google "the shop" Google Play. "

And launched a cloud service as well as a trial version of the e-mail application for personal computers, which is the version that will include features like automatic archiving feature Auto-Swipe which enables the user to archive e-mails unsolicited in a special folder away from the Inbox.

Service officials pointed out that the new versions of the application of the "Mailbox" will allow users to manage e-mail addresses of their own easily on all devices, whether computers or smart devices operating by Regular "Android" and iOS.

The new versions of the e-mail application is the first tangible products of "Dropbox" to serve "Mailbox" after acquired last March, a service that was confined only to the devices, "Apple" smart.

This, officials revealed "Dropbox" during their press conference as well as the application of Carousel, and an application to organize photos and videos stored on the user's account on the service cloud, and it will have two copies of the regular " Android "and iOS .

Officials confirmed "Dropbox" that the application Carousel provides users the ability to collect all their memories in one place, and reviewed by the date stored or through the event they were taken, allowing the application to use button bar timeline exists in the lower part of the transition between the images displayed easily.

The application supports sharing photos and videos of friends who are in "contacts" or in e-mail, and by pulling the image and inserted into the top bar and sent to the spam. At the same conference, revealed officials "Dropbox" for a number of new features in the service cloud storage their own, including a new property bearing the name of Project Harmony will offer users later this year, which allows users to service the amendment to the documents stored by applications using "Microsoft Office" which contain software "Power Point" and "Word" and "Excel".

The officials "Dropbox" confirmed during the conference that the service has become has 275 million users so far, to record an increase in the number of users compared to November last year of 75 million users, and also announced join Condoleezza Rice, U.S. Secretary of State former national security adviser, to the company's board.