Developers predict a way to use virtual reality in Facebook

Developers predict a way to use virtual reality in Facebook 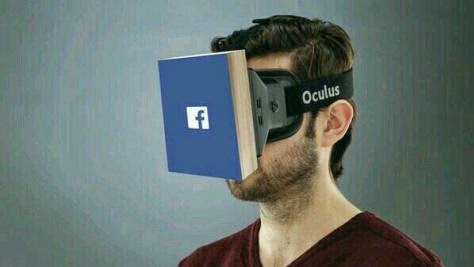 Revealed a group of developers in the company Chaotic Moon Studios, specializing in software development, for prophesying the video on how to use "Facebook" technology "virtual reality" in the social network after the acquisition of Oculus VR.

The "Facebook" acquired company Oculus VR last March for an amount of U.S. $ 2 billion, a company specializing in the development of techniques of "virtual reality" and the necessary tools to be used.

The developers, in conceptual video, to the possibility of the use of "Facebook" technology "virtual reality" in enhancing communication between users, and provide a new way to shop and purchase products via the social network.

And appeared in the video user bespectacled Oculus Rift, developed by the company Oculus VR technology to use for the purpose of "virtual reality" to make the user part of video games, to move to a virtual world within the "facebook" after pressing the special option in the social network.

The video user's ability to walk around in the virtual world, which is called the "market Facebook" Facebook Marketplace, to choose a product, review and test it, and call a friend from a social network to view via video chats, before the completion of the procurement process.

And built the developers company Chaotic Moon Studios video on what was a statement, "Facebook" on the reason behind the acquisition of Oculus VR , where the company has confirmed that it plans to open new horizons for the capabilities of Virtual Reality technology developed by the company, to go beyond the limits of gaming into new areas such as telecommunications, multimedia , entertainment, and education.

It is noteworthy that Mark Zuckerberg, founder and CEO of "Facebook", he had said, commenting on the deal, said his company sees the virtual reality that the future of social networking, considering techniques and devices VR pads are the future in form of smart devices such as phones and computers tablet platforms present.

Related : Developers predict a way to use virtual reality in Facebook