(Updated: May 9, 2015)
In a previous http://ikkemunandar.blogspot.com /2014/03/olympia-how-canadas-csec-maps-phone-and.html">article we provided a very extensive description of a communications analysis tool used by the Canadian agency CSEC. Here we will show two video demonstrations of analysis tools which are used by intelligence and law enforcement agencies all over the world: Sentinel Visualizer and Analyst's Notebook.

The first intelligence analysis program is Sentinel Visualizer, which was developed by FMS Advanced Systems Group. This is a 'minority-owned' small business founded in 1986 and based in Vienna, Virginia, which provides custom software solutions to customers in over 100 countries.

This video shows a demonstration of how the Sentinel Visualizer software program can be used to analyse telephony metadata in order to discover new targets:


FMS claims that In-Q-Tel, the CIA's venture capital arm is an investor in FMS, apparently in order to improve their products so they can fit the needs of the CIA. FMS also claims that its product is much cheaper than the alternative, with the price of a single-computer license for its Sentinel Visualizer starting at 2699,- USD, while IBM's Analyst's Notebook tool starts at 7160,- USD.

Very similar to the Sentinel Visualizer is Analyst's Notebook, which was developed in the early 1990's by i2, a UK-based arm of software company i2 Group which produced visual intelligence and investigative analysis software. After a number of acquisitions, it became part of IBM in 2011.

This video demonstrates how a "Pattern-of-Life Analysis" can be conducted by using Analyst's Notebook - Esri Edition:

Analyst's Notebook is said to be used by about 2500 intelligence, security and law enforcement agencies, as wel as police forces (like for example the Dutch police, the German Federal Criminal Police Office and the London Metropolitan Police) and investigative organizations and companies in over 150 countries. According to a range of job descriptions, Analyst's Notebook is also used by analysts at NSA.

As can be seen in the second video, these intelligence analysis tools are quite powerful and able to provide a deep insight into the life of a targeted person. But the presentation also shows that this kind of surveillance is consuming too much time and resources for using it against millions of innocent civilians.

Like the example in the second video, these tools are mainly used for operations against known and potential terrorists and a number of other people of interest, like drugs and weapons traffickers, and also some high level foreign government and military officials.

Regarding the intrusiveness of these tools, we should also keep in mind that they are used by law enforcement and police forces too. Where intelligence agencies use these tools generally for preparing reports for political and military decision makers, their use in numerous criminal investigations by the police can affect ordinary citizens much more directly.

On December 15, 2013 the CBS television program 60 Minutes provided some hitherto unseen vieuws from inside the NSA headquarters. One of those was an NSA employee who gave a demonstration of how the metadata contact chaining method works. The following screenshots show a tool very similar to the ones in the videos above:

Today, the German magazine Der Spiegel published in its print edition a slide from an NSA presentation that shows a contact graph based upon a social network analysis for the CEO and the Chairwoman of the Chinese telecommunications company Huawei: 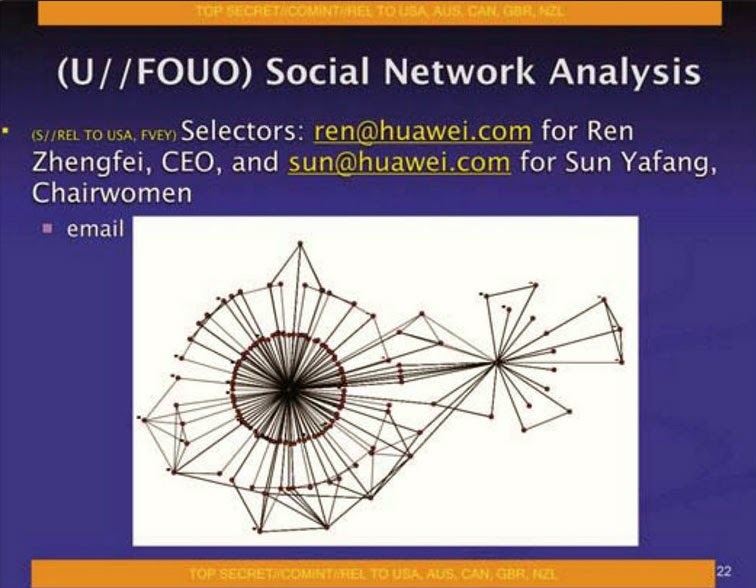 See our previous http://ikkemunandar.blogspot.com /2014/03/olympia-how-canadas-csec-maps-phone-and.html">article about the Canadian OLYMPIA tool for how intelligence agencies can map such a social communications network by using just one or two e-mail addresses to start with. See also an earlier http://ikkemunandar.blogspot.com /2013/09/an-nsa-eavesdropping-case-study.html">article about how NSA used similar techniques to create contact graphs about the Mexican and the Brazilian president.

Update:
The presentation below shows how Analyst's Notebook was used in an operation in which Italian law enforcement tracked CIA operatives who were involved in kidnapping a Muslim cleric in Milan in 2003:


Links and Sources
- FMSASG.com: How Sentinel Visualizer is a Superior Alternative to IBM's i2 Analyst's Notebook

A few of our information about the Video demonstration of two intelligence analysis tools, hopefully give more knowledge for you

You have finished reading Video demonstration of two intelligence analysis tools and many articles about Techno News in our blog this, please read it. and url link of this article is https://ikkemunandar.blogspot.com/2014/03/video-demonstration-of-two-intelligence.html Hopefully discussion articles on provide more knowledge about the world of new tech gadgets and Techno News.