Nepathya to perform a concert tonight in Wembley Arena, London

Nepathya to perform a concert tonight in Wembley Arena, London

Nepathya- the popular Nepali folk/rock band that is in the music scene for more than 2 decades and did peace concerts all over Nepal during insurgency period, will be performing a record breaking concert tonight in Wembley Arena, London in front of 12,000 audiences. This is the first time that a Nepali band will be doing such performance in Wimbley Arena- that had performances from biggest names in music from UK itself to all around the world like The Beatles, The Rolling stones, Bob Dylan, U2, Dire Straits, Spice Girls, Alter Bridge, Madonna, Shakira, Evanescence, Muse etc.With the capacity of 12,000, Wembley Arena is often confused with Wimbley Stadium (home ground of English national Team) that has capacity of 90,000 and even witnessed the biggest concerts of the world.At first, I was also confused with Wembley Stadium but later checked for the fact after hearing the capacity of the venue. 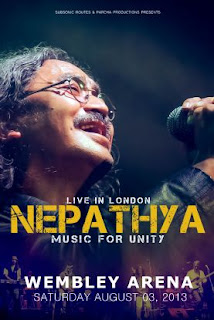 Tickets are priced at £ 29 for the concert which is also named as Music for unity, this time its not only for all Nepalese but for the people of the whole world.
Before leaving for London, Nepathya's lead man Amrit Gurung in an interview with Kantipur expressed his  excitement to get the opportunity to perform in such popular arena: Wembley Arena- also one of the biggest arena in London. It is also a matter of great proud for all Nepali to have our band performing there and a great honor to all the Nepalese living there in London. This concert also helps in promoting our Nepali music in the world music scenario. Being here in Nepal, I am desperately waiting for some early video clips in Youtube and wish for the DVD to release soon.

Information about the Nepathya to perform a concert tonight in Wembley Arena, London has been discussed