A better more efficient and odor eliminating homemade air purifier than just taping a 20x20x1 filter to a box fan. Sometimes you need to help clear the air in a dirty environment but don't want to use an expensive air purifier such as in a room after renovating and painting. Here's a cheap and easy way to build one.
Air purifiers can be expensive and you've probably seen articles recommending to just put a 20" x 20" x 1" furnace filter on a cheap 20" box fan and POOF! instant cleaner air for not a lot of money. It really does clean the air pretty cheap.

There's a problem with this though. These fans weren't designed to be run with a filter. The filter will restrict air flow which will put a higher strain on the motor causing it to use more electricity and in worse cases could be a fire hazard. The higher the MERV rating (cleaning efficiency) of the filter the more stress it will put on the fan.

Don't worry! You can still have your cheap air purifier as long as the filter area is increased to decrease the effect of air resistance. Instead of using one 20x20x1 filter we'll use two 20x25x1 filters which increases the filter surface area over 250%. It's a little more expensive because you're using two filters instead of one but the increased filter surface area also helps the filter last longer before it gets clogged up and we're saving on energy use compared to a single filter.

I can't take credit for the design, I found it via Marshall Hansen Design but I'm using different filters.

I recently remodeled my basement and there's a lot of dust (including drywall dust and sawdust) and fumes from paint, cleaners and other building materials. It's an underground basement and mold has to always be a conern too. Because part of the space will be my home theater in the future I plan to get a more expensive air purifier that's smaller and quieter such as this Fellowes Quiet Air Purifier AP-300PH with True HEPA Filter

because it has great reviews, is reasonably priced and the replacement filters aren't that expensive or a Sharp Plasmacluster True HEPA Air Purifier

if I find some extra Benjamins in the couch cushions. But I don't want to put that in the dusty environment right away because I'll have to replace the more expensive filters fairly quickly because the air is so bad. I also don't want to spend the money right now but I do want cleaner air now.

So I decided to get things going with a homemade air purifier that has filters that not only clean the air of particulates but also reduce VOCs and odors. Even after I purchase an air purifier I'll still have an air purifier I can use for other purposes like when I'm painting or cutting wood.

Also, don't forget to add more plants to your home. They're natures air purifiers. Not only do they convert carbon dioxide to oxygen but houseplants filter toxins and emit negative ions too!

The nice thing about this box fan filter setup is you can use any filters you want. If you are only concerned about large particles generated from something like cutting wood, you can use cheaper, lower MERV rated filters. If you're worried about finer particles from allergens such as mold, you can use a higher MERV rated filter. To understand more about what the MERV ratings mean have a look at Table 2 on this EPA article on residential air.
I chose to go with the Filtrete Home Odor Reduction Filters which are a new type of filter from Filtrete. They contain a lot of activated carbon to help filter out odors and VOCs.  They are rated MERV 11 and are equivalent to their 1000 MPR furnace filters. They should do a good job with even the fine drywall dust and the activated carbon will help a lot with odors. I bought a 4 pack for around $57 which gives me 2 sets of filters.

I've been using in my air conditioning for the past few years. Plus Filtrete packs over 180 grams of activated carbon to help reduce odors.

which does a much better job of filtering small particles. If odors are a problem I'll get some Cut-to-fit Carbon Prefilters

and tape them over top of the Filtrete filters.

Okay, enough of the why, now for the how!

You're thinking "OMG! He's actually describing how to open a cardboard box?!?!?!" The best deal I found for these filters were on Amazon and with my Prime membership (or supersaver shipping) the shipping is free. Plus the packing box is going to be part of the filter so we need to keep in intact.

The box is sealed very well. Not only is it taped but the seams are also glued together. To get the filters out of the box I cut the top where it's perforated with a utility knife as shown. 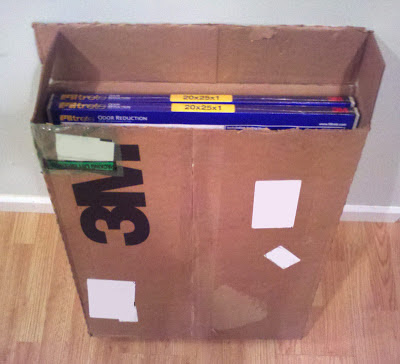 Be careful not to cut too deep and damage the filters. Keep the box someplace safe to the side while we continue.

Start by taking 2 of the filters out of their plastic wrappers and lay them one on top of the other with the air flow arrows pointing towards each other. With the Odor Reducing Fitlers this means the black, carbon sides will be facing each other.

With the filters lined up, tape one of the short (20") edges of the filters to create a hinge between the two filters as shown. 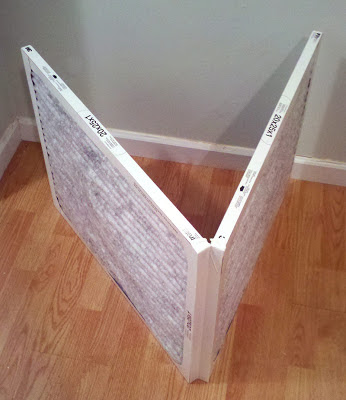 I decided to go with white duck tape so it looks a little nicer but it makes it hard to see in the photos against the white cardboard filter frame. 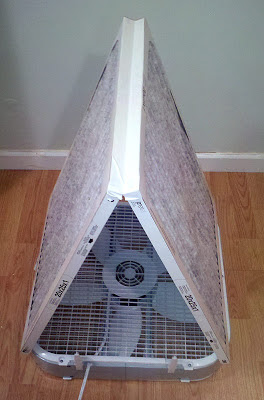 Use a strip of duck tape to secure each side to the side of the fan. 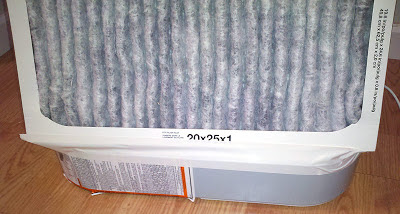 Step 4: Cut and Attach the Cardboard

Cut out one of the large sides of from the cardboard shipping box, place it over the top of the of the filters and secure it with a strip of tape to the top of the fan. Position it so that it's pretty even over both filters but it doesn't have to be perfect. 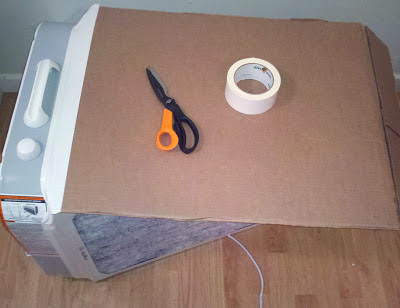 Using a pencil, trace around the filters (while pressing down the cardboard so nothing moves) to mark where the cardboard needs to be cut.

Lift the cardboard up (the front piece of tape acts like a hinge) and cut along the lines to trim the sides. By the way, I really like these Fiskars Cuts+More 5-in-1 Multi-Purpose Scissors 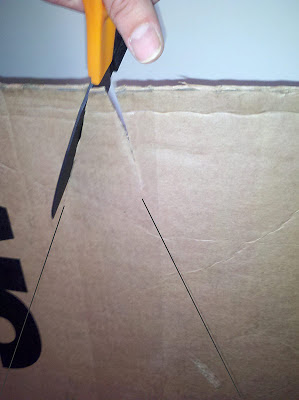 Repeat the process for the bottom cardboard. The other large piece from the box is seamed but it's taped and glued and very stiff so it shouldn't be an issue but you can run a strip of duck tape over the seem if it makes you feel better.

Also keep in mind that the bottom of the fan has feet. I positioned the cardboard underneath the feet and then pulled the feet out to tape.

After taping up the sides of the bottom cover to the filters, I added an extra strip of duck tape all the way around where the filters/cardboard meets the fan for added support. The rounded corners of the fan means there might still be an air gap there so check them and add extra duck tape if necessary. On the bottom there are also some holes, duck tape over those as well. Finally, replace the feet.

Step 5: Seal The Back

Where the hinged filters meet the cardboard in the back, add another strip of duck tape for support and to seal any gaps. 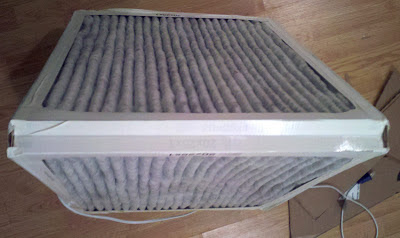 Give another look around the seams to make sure there aren't any gaps. If you find any, tape them up.
When using the fan, I always make sure that the cord isn't underneath the cardboard and instead is under the metal fan chassis, just in case something goes wrong and the cord overheats. Can never be too safe.

When it's time to replace filters, use a utility knife to cut the filters free but leave the cardboard in place. Then just hinge and attach the new filters.

Information about the Better Box Fan Air Purifier has been discussed

A few of our information about the Better Box Fan Air Purifier, hopefully give more knowledge for you
You have finished reading Better Box Fan Air Purifier and many articles about Techno News in our blog this, please read it. and url link of this article is https://ikkemunandar.blogspot.com/2013/06/better-box-fan-air-purifier.html Hopefully discussion articles on provide more knowledge about the world of new tech gadgets and Techno News.