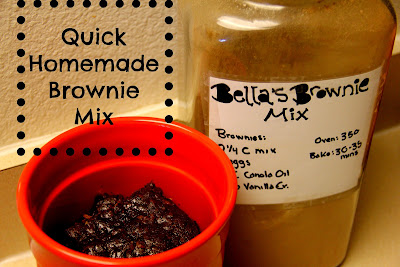 My husband loves brownies. Loves them.

During our long distance days, I packed up a lot of brownies in boxes and sent them to various Air Force bases throughout the world. Now that we are together, the brownie making has continued on.

We aren't big sugar eaters, but he likes a dessert in his lunches so we average a batch of brownies a week.  I have attempted other desserts, like peanut butter cookies or raspberry cake, but he asks where the brownies are. Apparently, he doesn't get sick of them so I am not allowed to be sick of making them.

I did, however, get sick of buying brownie mix every time I went to the store. I was able to stock up a couple times on 99 cent boxes, but I knew I could do better. One of my goals for this year (or life) is to avoid paying convenience and just do things myself. Plus, I try and avoid ingredients that I cannot pronounce whenever possible, and I know to flee when I see "partially hydrogenated soybean oil" on the list.

Not sure where you get your brownie mix, but mine contained some of these: niacin, thiamin mononitrate riboflavin, partially hydrogenated soybean oil, artificial flavors...Now, I am no nutritionist, but I don't know what that crap is, so we are probably better off without it. General rule.

I had some extra time on my hands this week so I browsed the Internet (Pinterest!) for homemade brownie mix recipes and then compiled them all to create my own. Very simple, and I made a large batch of it so it is all ready for next time!

I'm storing mine in a big vintage glass jar from England that I picked up at a local thrift store for $4. 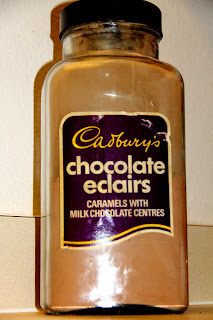 First, the mix:
1 large glass jar or pantry storage container.
4 cups of sugar
3 cups of all purpose flour (most recipes called for unbleached flour, but I only have all purpose and bread flour on hand and I figured there must be a reason they call it "all purpose," right?)
3/4 Teaspoon of baking powder
1/2 table spoon of salt
1 1/2 cups of cocoa powder

**I mixed mine up by sealing the jar and shaking/spinning/dancing with it. You could be civil and use a spoon and a mixing bowl and then pour it into a jar, but I try and avoid pouring powdery things when at all possible. I tend to make a cloud of culinary dust all over my kitchen. 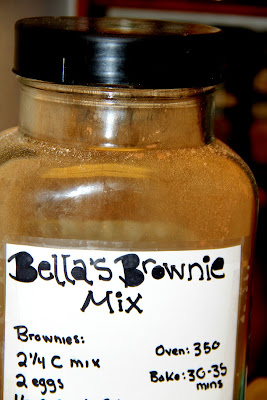 The mix is now happily residing in my pantry for more brownie making fun at later dates. Now, onto making THE BROWNIES!

Preheat oven to 350*
2 1/4 cups of brownie mix
2 Eggs
1/3 cup of vegetable/canola oil
(probably could be healthier and use coconut instead!)
1/4 cup of water
*look! You could pronounce all of it! No mystery!*

Whisk all that deliciousness up in a bowl. Add in any additional ingredients for a twist (suggestions below!). Pour into something like an 8x10 pan which you have greased. (Confession: I do not yet have such a pan in my kitchen arsenal. So I used a larger baking dish, which because of the size resulted in thinner in width brownies. Nothing to do with the mix, just my poor choice in pans.) Stick them in the oven for ~30-35 minutes. Allow to cool and cut. MMMM deliciousness!


Variations:
Because I *have to* make brownies every week, I at least try to mix up things a little bit by adding different stuff to them. Some delicious options include:

Add in 1/2 cup of your favorite chopped nuts for a little crunch!
1/2 cup of chocolate chips of your choosing or M&Ms
1/4 cup of Nutella
Substitute the 1/4 cup of water for 1/4 cup of COFFEE for Mocha Brownies (My favorite!)
1/2 cup of chopped up reeses peanut butter cups, or 1 mini cup per brownie square (Husband's Favorite!)
Add in 1/2 cup of shredded coconut and a teaspoon of coconut extract (smells soooo good!)
2 Teaspoons of vanilla extract, or any other extract you like
3/4 cup of mini marshmallow (like smores!)
Add your favorite frosting to the top when they cool. Add Sprinkles!!

Yesterday I made the coconut ones, and my, my, my they were something glorious. Hope you guys enjoy this and have fun customizing the recipe to your favorite flavors!

Information about the Thrifty Thinkin': HOMEMADE BROWNIE MIX has been discussed

A few of our information about the Thrifty Thinkin': HOMEMADE BROWNIE MIX, hopefully give more knowledge for you
You have finished reading Thrifty Thinkin': HOMEMADE BROWNIE MIX and many articles about Techno News in our blog this, please read it. and url link of this article is https://ikkemunandar.blogspot.com/2013/03/thrifty-thinkin-homemade-brownie-mix.html Hopefully discussion articles on provide more knowledge about the world of new tech gadgets and Techno News.